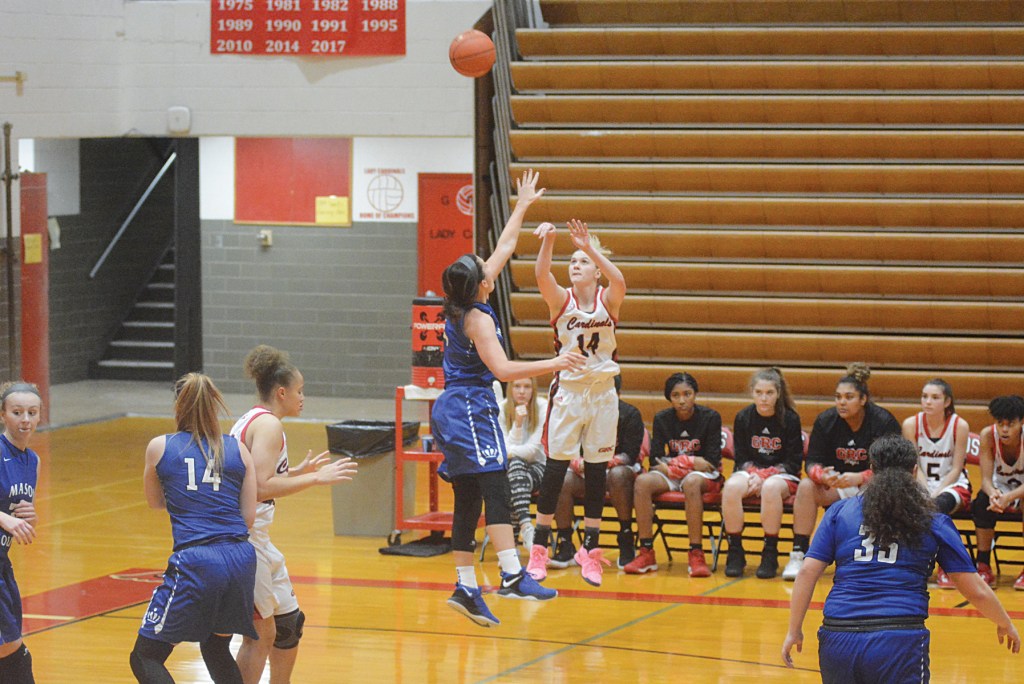 Kennedy Igo shoots a three in the second half of GRC’s 71-30 blowout victory over Mason County Wednesday. Igo posted 15 points in the first half and finished with 20. (Photo by Micah Satterly)

The George Rogers Clark Lady Cardinals had no problems pulling out a victory against 10th Region rival Mason County.

The Cards had a big lead early as they led 19-6 after the end of the first quarter and by halftime GRC led 37-18.

Junior Kennedy Igo posted 15 points in the first half.

Head coach Robbie Graham said his team started slow, but picked up the slack as the game went on.

“We came out a little sluggish,” he said. “We wanted to have a good start. We went in halftime with a 19-point lead and I did not think we were playing our best. We came out in the third quarter and played much better. We caused more turnovers and did a good job. In the past, their 1-2-2 half court defense has given us problems and we did a really good job of playing against that. We out rebounding them and we are not really big. We are not really big, but we are tenacious and really want the ball.”

In all three of GRC’s game this season, the Lady Cards have traded baskets with the other teams in the first few minutes before finally pulling away.

Graham said his team is adjusting to being back on the court.

“It takes us a minute to get settled in,” he said. “Once we get settled in we take off. Saturday is going to be a tough regional opponent and they are one of the favorites to win the region. They have a lot of size so we will need to be ready to play off the opening tip. It is a good test for us early and will allow us to see where we are. We will have to be ready to play and we will prepare for the next couple days. We will get after it.”

GRC will head to Scott High School Saturday for a rematch of the 10th Region championship from last season and then the Lady Cards will get back on the road Dec. 14 to take on 40th District opponent Paris.

Graham said these early season match ups against these rivals will pay off for GRC in the long run.

“Our schedule is brutally tough,” he said. “We want to play a tough schedule so every night is tough to allow us to be ready in the postseason. We talk about being the iron-fist team. We are a tight-knit group and we stay together. We cannot let anyone break that iron fist. We will be on the road and hit some adversity, but we have to stay together and maintain. We are all we have so we will help each other through rough times. Hopefully we can improve night in and night out and get better at the end.”