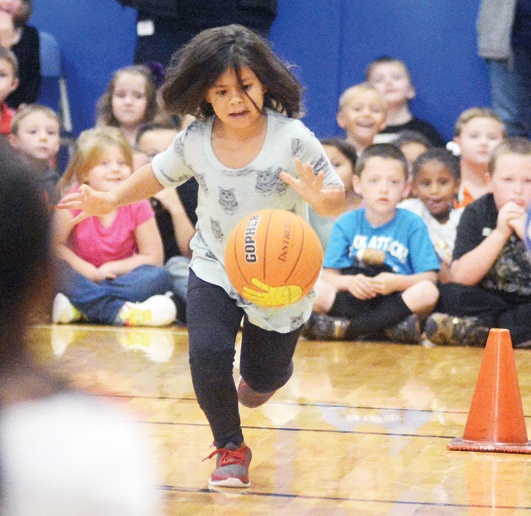 The Upward 40391 basketball league is one of several programs in Clark County focusing on youth. (File photo)

Local churches and community members stepped up to ensure the Christian-based basketball and cheerleading program was here to stay.

“The churches saw this as an opportunity to reach the kids that weren’t there and to work on the underlying issues,” McCormick said. “We were breaking down barriers and coming together for the cause of the kids.”

Upward 40391’s first season had about 860 players, and this year, about 940 players are signed up and ready to play. Upward includes players of all ages from preschool to 12th grade.

The cost of Upward was $55 per player, but scholarships were also available.

Practices began in mid-November, and the first round of games is this Saturday. The season continues throughout the winter months and concludes with a celebration on Feb. 23, 2019.

“Churches in all different parts of the community are breaking down that race and class barrier by being in each other’s spaces,” McCormick said.

McCormick said the new churches that joined this year allowed for the higher number of registered players. Among the churches, five are offering space to practice or host games.

Upward’s national organization even donated funds to help make it possible after tuning into Facebook live sermon from Calvary. The leaders of Upward’s national program sent a letter to Upward 40391 expressing their excitement about what was happening in Winchester with its program.

“We at Upward Sports are excited about what God is doing through you in the Winchester community,” the letter stated. “Your purpose of seeing unity occur across racial, socioeconomic and denominational areas is really inspiring and it is encouraging to see the impact and difference that you are already making.”

Gaines said when the church purchased its current property on Iron Works Road, the building was dilapidated. Just in the year and a half, Gaines has been at Christ Church the church has sunk nearly $200,000 into repairs.

Gaines said the gym was one of the last projects and for a time, the church had installed an inexpensive temporary floor, but a permanent floor was needed once Upward 40391 approached Christ Church about hosting games.

Gaines said the floor is nearly finished and will be ready for the first round of games.

“It will be a nice space for Upward and our church,” Gaines said.

Gaines said he was shocked at how the churches in the community supported each other.

Gaines, also a coach for an 11th and 12th-grade team, said coaches not only teach the players the fundamentals of the game but they also have a portion of every practice and every game dedicated to character development.

This week, the players discussed honor and respect, McCormick said.

Upward intends to create a positive and motivational atmosphere, a needed change from the toxic attitudes of parents and coaches in other youth sports league, McCormick said.

“I like to say we are helping kids become better players on the court and better people off the court,” McCormick said.