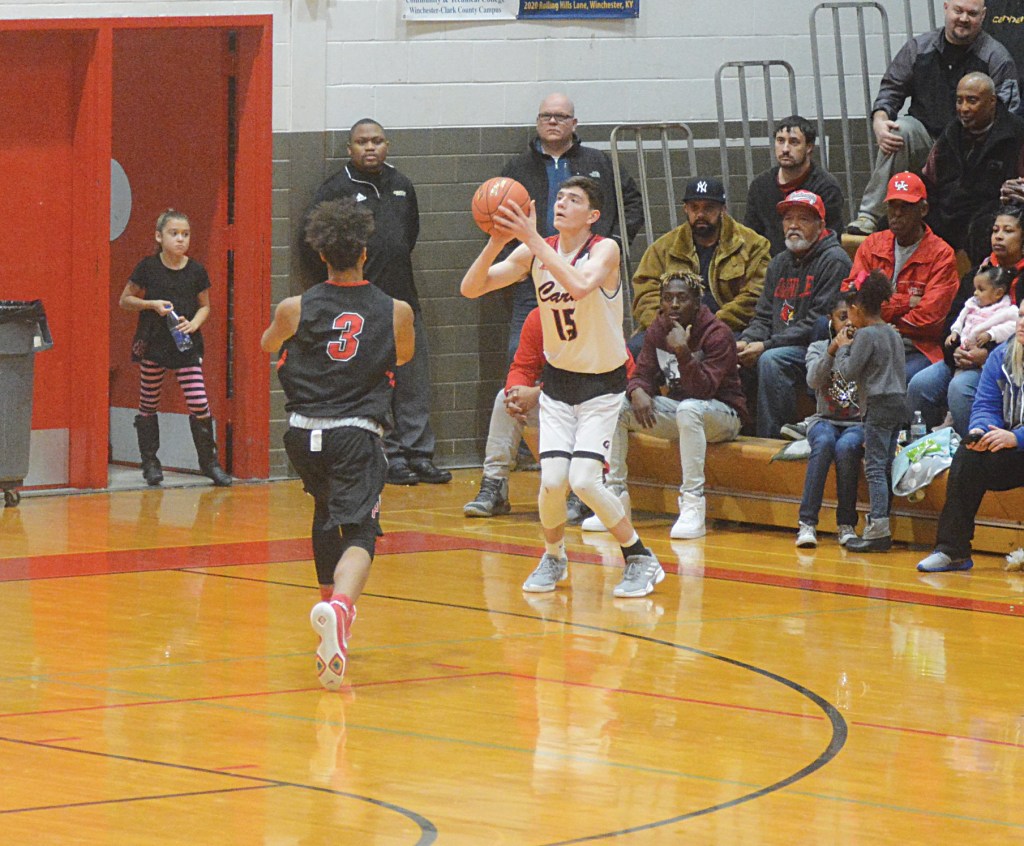 Jared Wellman prepares to shoot a three in the corner in GRC’s 78-71 win over Pendleton County Friday. Wellman pitched in 22 points and made six three-pointers. (Photo by Micah Satterly)

The game was played uptempo and had a region tournament type of feel to it.

Pendleton standout and UK commit Dontaie Allen started the game off with a three to give the Wildcats an early 3-0 lead.

GRC quickly changed the pace as Jehdon Jenkins sank a midrange jumper, Jordan Graham had an easy backdoor lay up and Brennan Canada drilled a three to help the Cards go on a 7-0 run before Pendleton was forced to call a timeout.

The teams continued to trade baskets throughout the rest of the first half as GRC held on to a 39-36 halftime lead going into the locker room.

After a few possessions with turnovers and being unable to stop the Cards on the defensive end, the Wildcats fell into a hole and led by as many as 15 in the game.

GRC held on tightly to a 58-44 lead after the end of three quarters.

Allen of Pendleton was forced to take difficult shots in desperate attempts to bring the Wildcats back in the game, some of which he made.

Allen scored 20 points in the fourth quarter alone, but was not enough as the Wildcats hit the road with a loss.

“We had good stretches,” he said. “The first part of the game was really good and then we let off. Then we had some really good stretches in the second half. Overall, it was a great learning experience. There was great energy and a great crowd. We shot the ball pretty well from the three-point line. There was a lot to take from this and I think we let our emotions get the best of us at times.”

Cook was impressed with the intensity the game was played with this early into the season.

“It was a fast-paced game,” he said. “I wish we did a better job of controlling some things late in the fourth quarter. It is just something we have to get better at in controlling the game. Like I said, we have to keep our emotions in check and make sure we play smart basketball for four quarters.”

Cook said his team was able to stretch out the lead after a back-and-forth first half was because of their team communication.

“We communicated and we were focused,” he said. “When we did that, we were able to get the ball where we needed to and were in the right place defensively. It helped us especially when we guarded Dontaie. He had 20 points in the fourth I think and he was really forcing the issue. Our guys were getting frustrated over a few things and you just have to do a good job at controlling what you can control.”

Cook was optimistic on how he thought his team did in guarding Allen.

“We did a good job early on,” he said. “It was really good until the fourth. I think we should have played smart. You have to play hard and smart, but I think were focused on trying to go too hard. For three quarters, I thought we did a good job.”

The Cards will host Woodford County Dec. 11 and Cook said his team is getting a well-deserved day off Saturday after playing hard and taking care of business Friday night.

“We are going to come in on Sunday and have a good practice,” he said. “We are going to focus on Monday to get ready for Woodford Tuesday, Paris Friday and Doss Saturday. We have an interesting week, but we need to take it day by day. We need to get better during those days and it will be good to get Ben Jackson back.”

Allen finished with 34 points for Pendleton.