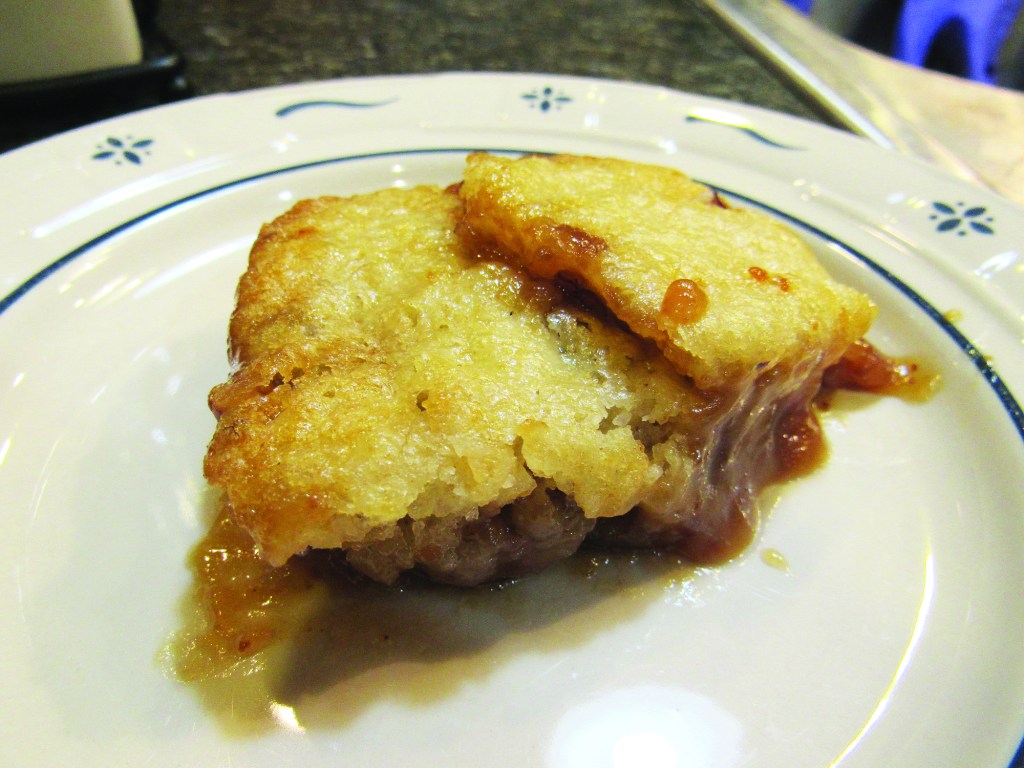 I was at the beauty shop last week, and while waiting to get beautified, I was looking through some magazines.

While looking through the latest issue of Taste of Home I found today’s recipe for Pecan Pie Cobbler.

Now I’m not tech savvy at all and I’m not great at taking pictures with my cell phone’s camera, but after a few tries, I had the recipe stored safely in my phone.

Bake uncovered until set, 30-35 minutes. Cool 30 minutes on cooling rack. Cobbler will thicken as it cools.

The picture looked so good I knew I’d be making this dessert very soon. I love pecan pie, and who doesn’t like cobbler? This seemed like the perfect recipe, especially since I didn’t make pecan pie for Thanksgiving.

This recipe was just crying out, “Make me.”

Sunday afternoon, I decided to put this recipe to the test.

I preheated the oven and then cubed the butter right into the baking dish.

I put the butter in the oven, and while it was melting, I put some water on to boil and began combining the next five ingredients in a medium-sized bowl.

There didn’t seem to be much batter, but I figured with the baking powder added, it would puff up while cooking.

When the butter was melted, I poured the batter over the top then sprinkled the pecans, brown sugar and toffee bits on top.

The water was boiling and I removed it from the stove and poured some into a measuring cup. Frankly, at this point, I seriously had my doubts about this cobbler. I’ve never heard of pouring hot water over ingredients like this recipe called for.

As I slowly poured the hot water over the dish, I shook my head and thought I was probably wasting my time and those wonderful pecans.

After placing the dish in the oven, I set the timer and started cleaning up the kitchen.

It seemed like no time had passed when the timer sounded, alerting me to check on the cobbler. When I opened the oven, it was obvious the cobbler was not done, so I let it cook another five minutes.

To my surprise, when the timer sounded for the second time, the cobbler was set, not very brown, but set.

I pulled the dish out of the oven and sat it on the counter to cool.

Surprisingly, the water either evaporated or was absorbed into the cobbler and was all gone after the dish baked.

By the time I decided to taste test the cobbler, it had completely cooled and I scooped out a little bit.

Brad said he’d try a little too. We both thought the cobbler smelled good, but I was disappointed when I tried it.

It didn’t taste like pecan pie to me. Brad thought it was OK.

As usual, I placed some cobbler in a couple of containers – one for Brad to take to work for his co-workers to taste, and one for me to take to The Winchester Sun for Whitney Leggett and other staff members to try.

When Brad got home Monday evening, he said there were mixed reviews by his friends at work. Tina loved it and wants the recipe, Donna said she didn’t like the texture, Lauren gave it two thumbs up and said it was delicious and Janette said she liked it better warmed up and that it almost reminded her of a cinnamon roll.

Whitney thought the cobbler was delicious, but recommended chopping the pecans a little. She also preferred it warmed a bit.

To give the dessert a fair shake, I decided to heat a little bit up and try it again. I did like the cobbler better heated up, but it still didn’t remind me of pecan pie.

It’s not headed to my self-made cookbook, but it is headed to Tina, if I can figure out how to forward it to her from my phone.

Let the bread, yourself rest