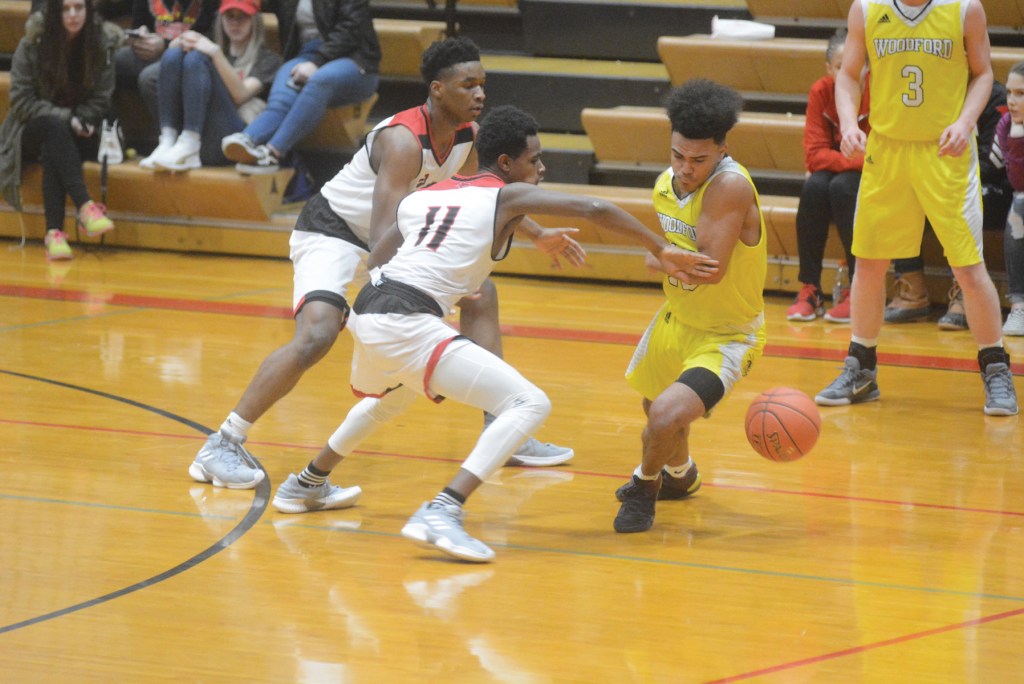 Jerone Morton (11) gets a steal in the second half in GRC’s 65-55 loss to Woodford County Tuesday. The Cardinals are now 3-2 on the season. (Photo by Micah Satterly)

The George Rogers Clark Cardinals hosted the Woodford County Yellowjackets and GRC failed to get the job done as they fell 65-55.

The Cards’ turnovers turned into sharp-shooting for Woodford as the Yellowjackets shot lights out from the three-point line.

GRC was held to a season low of 11 points in the first quarter and 10 in the second to trail Woodford 30-21 at the half.

The Cards were able to cut the lead to three points multiple times, but could not prevail.

Head coach Josh Cook said his team’s heads were just not in the game.

“We were not really focused,” he said. “We were distracted mentally. Woodford came out and played with a lot more aggression and understood their game plan. We did not come out and execute.”

GRC showed signs of their capabilities when they defeated Pendleton County last week who is a tough 10th Region tournament opponent.

Cook said his team is trying to find balance to play with more consistency.

“Our leadership has to be better,” he said. “Our practices are going to have to improve and be consistent. I cannot tell you that I am 100 percent satisfied with how our practices are, but I am going to keep pushing them to hopefully get them there. We have to find ways to get our guys to all want it at the same time. We are a work in progress. We will not play our best basketball until February and we have to stay together and keep growing.”

GRC is now 3-2 on the season with its other loss in a 57-48 road loss to another 10th Region opponent in Campbell County.

“If you handle it the right way and tune out the distractions your kids can learn from them,” he said. “If we can face it and admit these are the mistakes we are making. A lot of it is a mentality. We have to keep the negativity out and look at things wondering how can we do things better. That is what you are supposed to do during the season.”

The Cards still have to finish a tough week ahead as they will head to face to 40th District rival Paris on the road Friday and then take on Doss at Mason County Saturday.

Cook said this week’s limited practice time will be crucial.

“We will be practicing Wednesday and Thursday to take on Paris Friday,” he said. “Then get back up to go to Mason County Saturday. It is basketball season and we have to do a good job of putting the work in. We have to find a way to do it.”

Sandefur trusts in his team to give him confidence