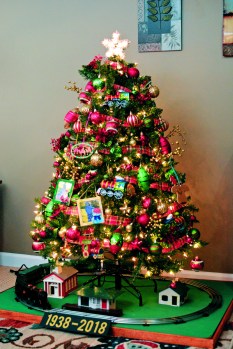 For 80 years, Bud Walthour has always had a train set underneath his Christmas tree. 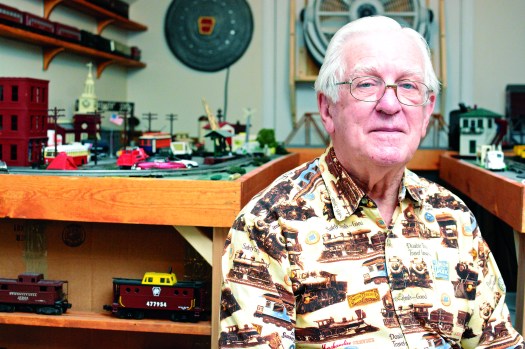 Bud Walthour has about 40 trains on display and about 104 pieces for his train sets. (Photo by Lashana Harney)

It was the winter of 1938 in Youngwood, Pennsylvania, when Bud Walthour, 6-years-old at the time, discovered a black O gauge American Flyer passenger train doing laps underneath his Christmas tree.

It was a gift from his father and the start of a lifelong love of trains.

The 1938 train celebrates its 80th year, operating as good as new — besides a few minor dents, as young boys are bound to make on model trains — underneath Walthour’s small Christmas tree in his apartment on Lana Lane.

Walthour’s father bought him another train a few years following 1938, but the actual start of his collection began in 1950.

Walthour was 18-years-old and in love. He was on the way to buy an engagement ring for his then soon-to-be wife, Margaret Ellen “Peg” Keough when he decided he’d stop in a train shop and buy himself a new model train, too.

He had met Peg at age 16. Walthour was set up on a double-date with his buddy, Bill. Peg was Bill’s date. But neither couple hit it off; instead, Walthour went on to date and then marry Peg.

“I think I made the right choice,” Walthour said.

They were married for 67 years; Peg passed away in January.

But all 67 years, Peg Walthour supported her husband’s love for trains. There was never a Christmas without a train under the tree. Walthour sets the 1938 train up every five years, alternating among other trains in his collection.

“We never had the tree with a pile of gifts, but we had the train,” Walthour said.

Walthour said he continues putting out the trains under the Christmas tree because of nostalgia. The trains bring about fond memories. As a boy, he would visit his grandfather and two of uncles, all of which had worked on the railroad, to see their trains set up underneath the tree. They would compare and see how each one differed.

When Walthour, now 86, moved to Winchester two years ago, he finally had the room to set up his massive collection, made up of more than 30 locomotives and 104 cars. He photographs and catalogs each piece of his collection.

He bought his latest train, a GP7 model, in March at a train show in South Carolina.

Walthour attends train shows all over and frequents train shops when he can find him; though he also browses eBay often, as in the age of the internet, it is convenient and easy, Walthour said. He buys, trades, and occasionally sells.

Walthour will also go on train excursions, such as the New River Train Excursion which takes passengers through the scenic hills of West Virginia.

Walthour said he prefers purchasing older trains, such as ones made in the 1950s compared to the cheaper, modern model trains sold as “toys.”

Walthour said he’s unsure of how much he has spent over the years on his collection, but the price tag never bothered him. If it brings him happiness, it’s worth it, he said.

As the train moves around the two 3×8 foot connecting tracks Walthour built himself and designed with AutoCAD, so do tiny people. One tiny person walks down the stairs when the train passes, and another comes out of one small home, one can pack ice into the back of a train car and another can pick up logs with the proper equipment.

It’s intricate, each tiny part added to the grandeur of it all, Walthour said.

Walthour, complete in a custom train shirts made by his daughter Cyndi Downing, sometimes sits in awe at the spectacle.

Walthour said his train room is still a work in progress. He isn’t done adding to his collection. He even plans to add another track soon.

“[I like] just looking for something that I don’t have,” Walthour said.

But this year, he celebrates another “trainiversary.”

This Christmas, he watches the 1938 black O gauge American Flyer passenger train take a few laps around the tree, with the same wonder and fervor as he did 80 years ago.