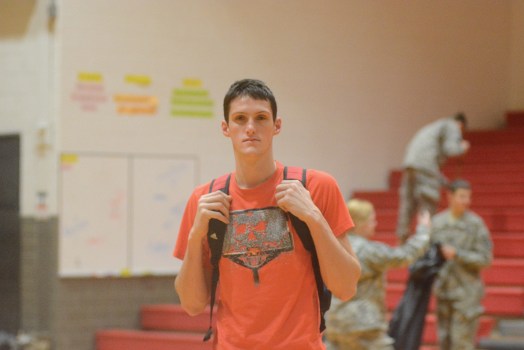 Junior Lincoln Bush set a goal to play basketball in college on a scholarship. (Photo by Micah Satterly) 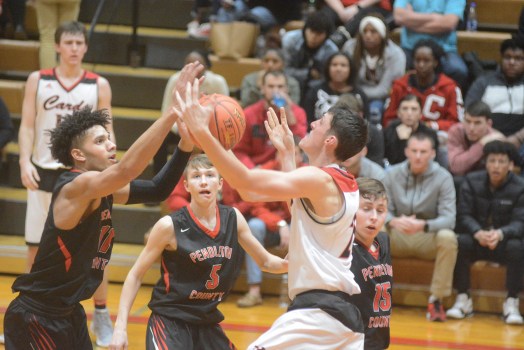 Lincoln Bush tries to gain possession of the ball in GRC’s win over Pendleton County Dec. 7. (Photo by Micah Satterly)

Junior forward Lincoln Bush has been playing basketball since his early childhood.

He played soccer until he realized he was meant to play basketball.

“I always loved the sport more,” he said. “I love working out and getting in the gym. I had more fun training and preparing for basketball than I did soccer so that probably had something to do with it too.”

Bush said his strongest parts of his game would be on the defensive end.

“I love to block shots and I am good at it,” he said. “I am a solid shot contester. I can finish around the if I can get an offensive rebound.”

Bush wants to work on speed of play throughout the rest of his career.

“I want to work on defense,” he said. “I am a little slow and I want to be able to be a diverse player. I need to do more speed and agility drills.”

Bush said his motivation is his family because they want him to be successful.

“They always inspire me to want to do my best,” he said. “They have been there for me through all the ups and downs and supported me through whatever. The least I can do is give them the effort they expect from me each time I play or in school.”

Bush set high expectations for himself during his junior and senior years.

“I am going to keep working hard until I get a free education,” he said. “My family wants me to go to college and I want to go to college. I could no ask for anything better besides being able to play basketball somewhere for free. I know it is possible if I put in the work for it.”

Bush said GRC will have to be on the same page if they want to make a deep run in the post season.

“We need to play as a team,” he said. “Team bonding is important. We all have to want the same goals or it will not happen. A few people can’t get the job done alone. It is a team effort.”