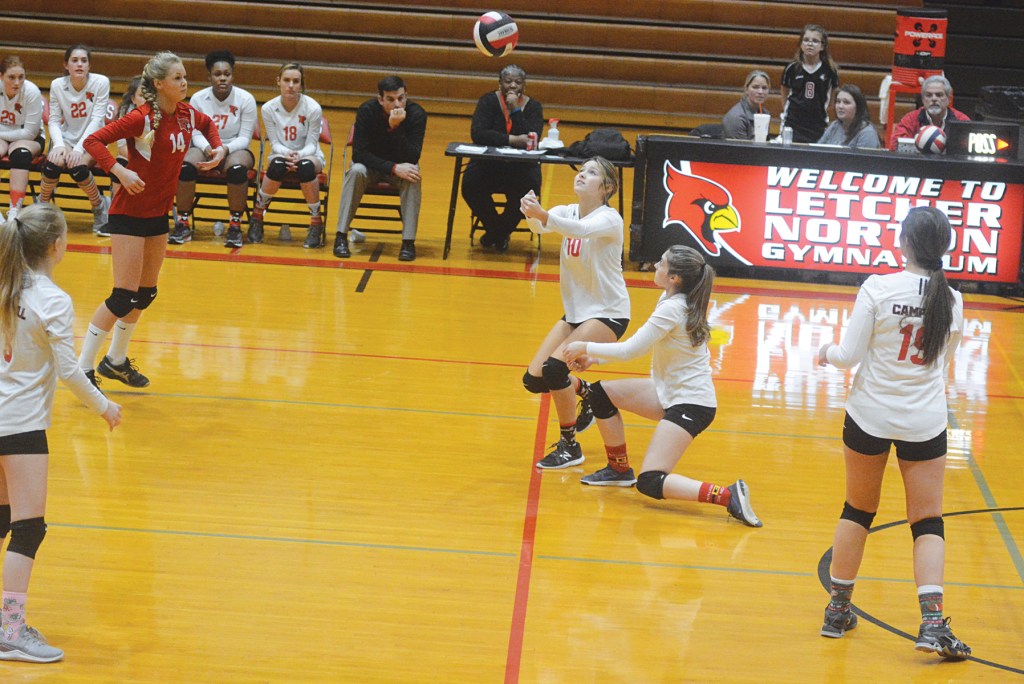 RDC seventh and eighth grade both were defeated by Harrison County Tuesday. Campbell wil be back in action Jan. 3 at McNabb. (Photo by Micah Satterly)

Both Robert D. Campbell Jr. High seventh and eighth grade teams were unable to pull away with a win against Harrison County Thursday.

“Even though we lost, I thought the seventh grade played very well,” she said. “This is some of their first year playing with some of the other girls on the team which makes it hard playing with someone you’ve never played with before. They did well on getting the ball back and forth and serving, but they get nervous. When you get nervous you cannot play that well.”

Simmons said the team has potential to be a great, but admits the lack of practice has an effect on the team.

“We have some really talented girls,” she said. “I do not know if they get nervous or what it is. We have not had much practice time either. It is hard to practice when one school doesn’t have a gym, but it is hard to find a place. We have great girls and we need a little more practice as well as more self-esteem. They need to be encouraged to play well. If you don’t have self-confidence then it is hard to play well. They need more self confidence to get in and play as well as we know they can.”

Simmons said the talent on the team will help the volleyball program be special.

“We have two or three girls who have tremendous talent,” she said. “Everybody needs practice and it just goes to show how important it is. These girls are a bright spot for the future of our volleyball team but they just need to reach their full potential.”

Simmons said the minor, easily fixable mental mistakes and errors are tied in the lack of self-esteem.

“They sometimes don’t put the forth the effort they should,” she said. “We have tried to teach them to call for the ball and we can’t seem to get them to process that. The others team loudly call out for the ball. We have three girls chasing after it and running into each other. Practice, self-esteem and you have to want the ball. They have to want it. We cannot put it on them. You have to get in position and get it done.”

Although Simmons gives her team tough love, she said there are many aspects which makes her team special.

“They don’t down each other,” she said. “When one person makes a mistake they are uplifting each other. They don’t point fingers or put the blame on one another. They build each other up and I really like that. They work well together. If you can’t work with each other then it is not good.”

RDC volleyball will be back in action Jan. 3 at McNabb.