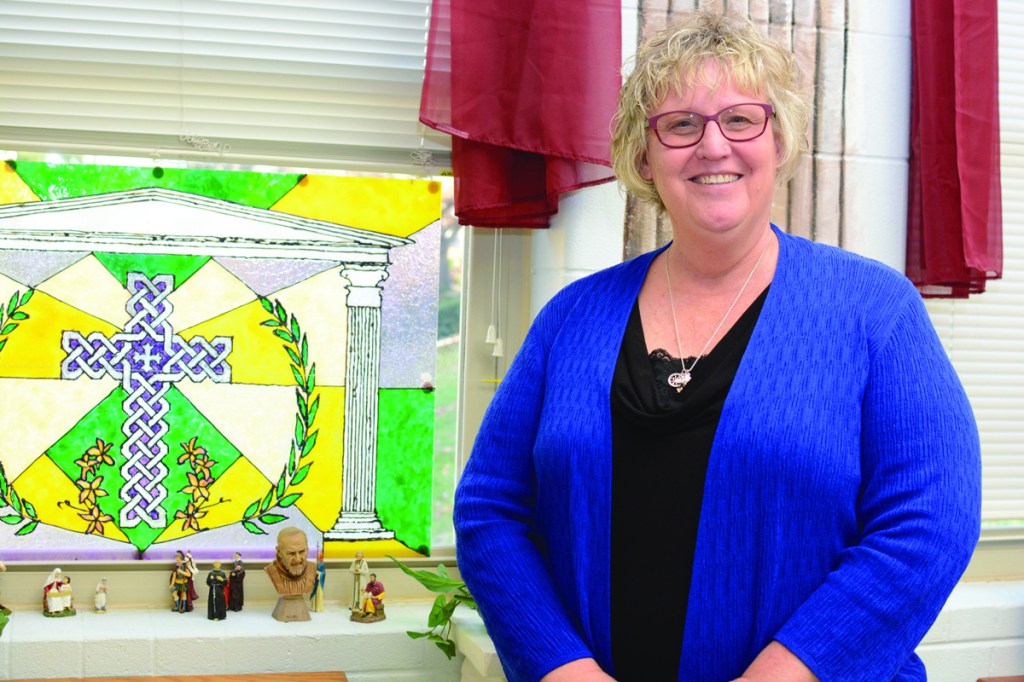 Susan Wallace has been teaching at St. Agatha Academy for 32 years.

Susan Wallace landed her first teaching job 32 years ago. And it will likely be her last.

Wallace is a second-grade teacher at St. Agatha Academy. She has previously taught fifth, sixth and third grade.

She knew she wanted to be a teacher since the fifth grade because her teacher at the time had made such an impact on her.

“I remember thinking I want to be a teacher just like her,” Wallace said.

Wallace was born in Ohio but moved around from state-to-state growing up before moving to Kentucky and eventually attending Berea College.

Wallace and her husband moved to Winchester in the late 1980s after falling in love with the town while scouting for places to move that were near Lexington.

All three of their children attended St. Agatha, and Wallace said she had the pleasure of teaching them.

“It gave them the most incredible foundation for their education,” she said.

Wallace said St. Agatha’s community is like a family. Over the years, she has watched the school grow, and Wallace said she has evolved with it.

Wallace said St. Agatha switched to a classical curriculum about seven years ago, and since then, she has transformed as a teacher.

“It gave us an opportunity to be the teachers that we wanted to be,” Wallace said.

St. Agatha teachers went on to attend conferences in New York, Cleveland, Philadelphia and more to learn how to teach classically. They all began to learn Latin so they could later teach it.

Wallace said she has loved teaching her students about history. In the second grade, students learn about the Roman empire. They still discuss the different types of government and other “social studies” components, but in a historical context, Wallace said.

“The world becomes more understandable to them,” she said.

Wallace said she also been amazed at how the students have embraced poetry, learning about all the great poets such as Emily Dickinson, Robert Frost and Alfred Lord Tennyson.

“They learn words not only have meaning, but they have beauty,” Wallace said.

Students then go on to recite poems, perfecting their reading fluency. Wallace said she was surprised at how reciting poetry significantly improves reading comprehension and fluency.

“We want them to write beautifully and to be able to read primary sources,” Wallace said.

Wallace said all of the classical elements integrated into St. Agatha’s curriculum has helped her to understand what it means to be a teacher: to guide, nurture and gift opportunities of discovery.

“I want them to love reading,” Wallace said. “ … It’s a beautiful opportunity to teach what it means to be a lifelong learner.”

Wallace said she thinks students have caught on to her love of reading, as one student brought her a mug for Christmas, covered with famous first lines in literature.

Wallace said every student — and grand student as she calls the students of her former students — has left a piece of joy with her.

“This is a joyful job,” Wallace said. “These kids are wonderful. They give life to people around them.”

Wallace said every part of St. Agatha over the past 32 years — her students, co-workers, the teaching, the learning, the Winchester community and more — have made her whole.

“Take any piece of it away, and something’s missing,” she said.