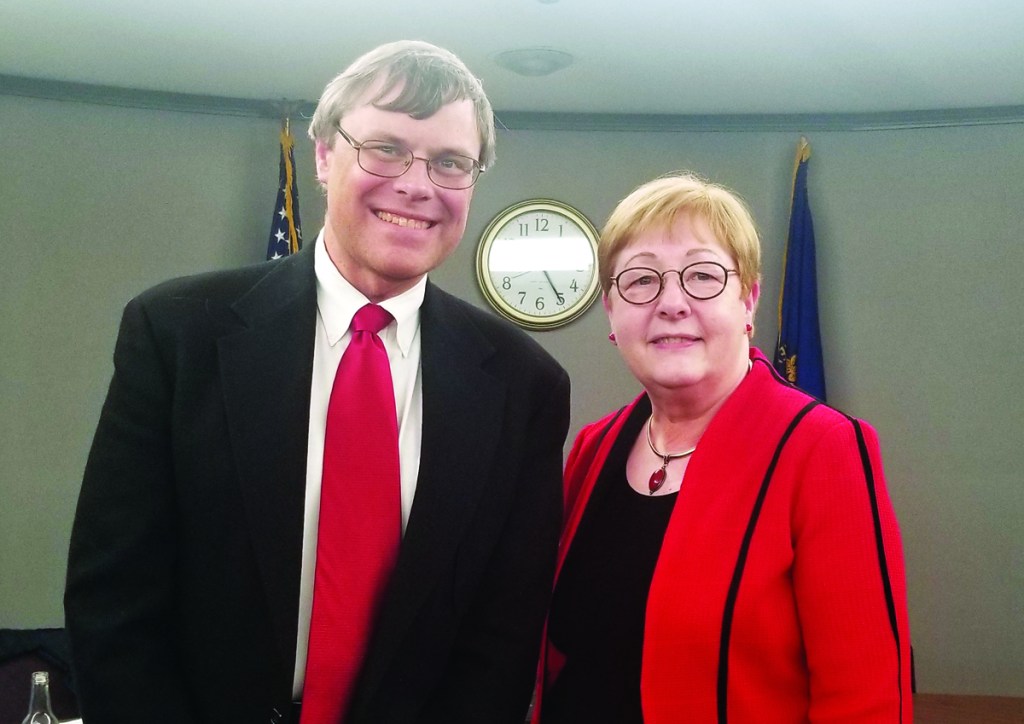 Clark County Board of Education members Michael Kuduk, left, and Judy Hicks wrapped their last board meeting Tuesday. Kuduk served on the board for about eight years, and Hicks served for more than 17 years. (Photo by Lashana Harney)

The Clark County Board of Education honored the ending of two board member’s terms at its last meeting of the year Tuesday.

The meeting marked the end of Judy Hicks’ and Dr. Michael Kuduk’s terms.

Board member Ashley Ritchie thanked Hicks for becoming a close friend over the years, despite their rocky start. Ritchie said they eventually bonded over chocolate.

Ritchie also thanked Hicks for being a prime example of what a board member should be.

“Many times we have called upon Ms. Judy for her experience and knowledge that cannot be replaced,” Ritchie said. “I think I can speak for everyone in this room, that we will always remember Judy’s famous quote: ‘We are not a minimal district.’ For that, we thank you.”

Board chair Scott Hisle also thanked Kuduk and Hicks for their service to the board. He said both of them had been a part of difficult decisions during their terms, overseeing large construction projects, district consolidation and reconfiguration and the hiring of a new superintendent.

“We have been transitioned from a trouble and turmoil district to a district that’s gained a distinguished rating, and we now have a solid academic and financial footing,” Hisle said. “For that, we’re thankful.”

Newly-elected board members Bill Taulbee and Sherry Richardson were sworn in by Judge Earl-Ray Neal Tuesday afternoon and will officially take office in January.

The board also discussed the addition of school resource officers, mental health professionals or counselors.

In its November meeting, the board failed to pass a motion that would have added two new district-wide SROs.

Earlier this year, the board approved hiring three additional SROs.

Donald Stump, administrative director of operations, initially asked the board to consider supporting five additional SROs, but the board voted to add three SROs instead. The district currently employs five SROs.

Hisle said he put the item back on the agenda for Tuesday’s meeting to give the item additional thought, as he wanted to know if the district needed additional SROs or if they needed other mental health professionals or counselors.

Supt. Paul Christy said after talking with principals, most schools are in need of additional school resource officers.

Christy said he would like to have three additional SROs to have one in every district school.

Ritchie made a motion to table the item for the next regular meeting when the new board members are present and able to vote. Kuduk agreed.

Hisle said he would have rather resolved the issue during the meeting as it could bring the district one-month closer to having two more SROs.

The board also tabled the approval of the grant initiatives from the On The Table community forum. The board had previously tabled the item in its November meeting.

The board asked the superintendent to take a more detailed look into the logistics of various ideas such as updating cameras, putting film on school windows, handheld metal detectors and more. The board will discuss the initiatives at its next regular meeting in January.

In other action, the board:

— approved the revision of the Community Education director job description