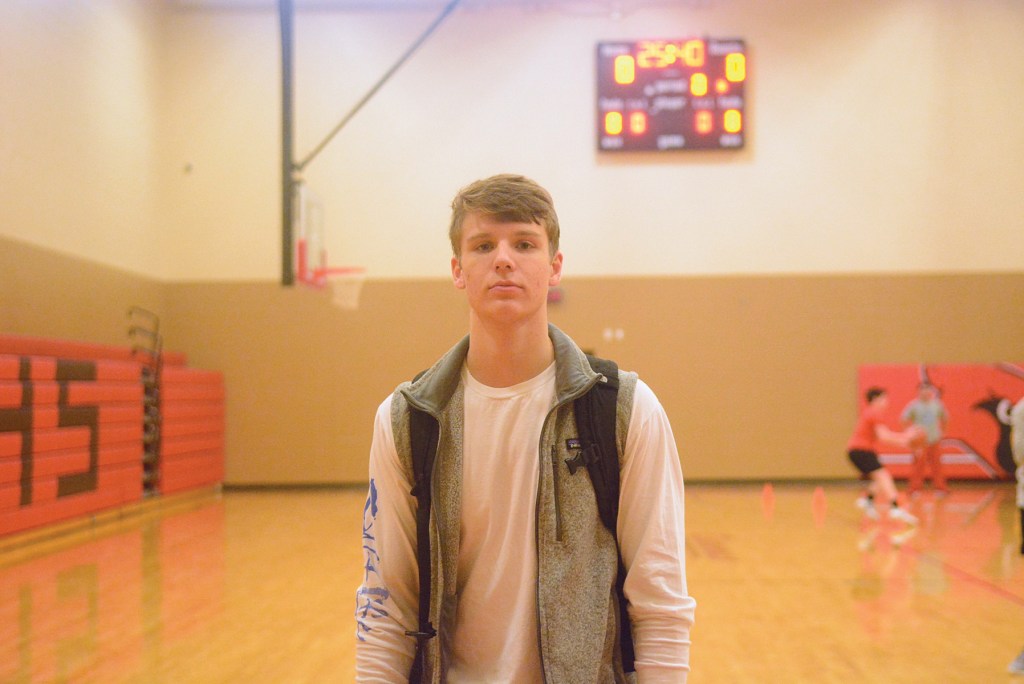 Junior Hunter Helderman said his game day ritual is to listen to music, take a nap, wake up and listen to more music. (Photo by Micah Satterly)

Junior Hunter Helderman started playing basketball in kindergarten and has always had a profound love for the game.

He used to play football and baseball, but he wanted to choose the sport that went with his family tradition.

“My dad used to play and he was really good,” he said. “There was always posters in the house with him getting buckets, cutting down nets and stuff like that. It made me want to be just like that.”

Helderman said the teamwork aspect is what has kept him playing.

“Working as a team is more fun,” he said. “In football there are 11 people and in basketball there are five. With five it is a lot different because you do not have to communicate as much. If there is more people around you it gets hard to hear. With less people, it is easier to be more successful as a team.”

Helderman feels confident in most of his offensive abilities.

“I would say my strengths are driving,” he said. “I am a coachable player. I like to listen to what I do wrong and correct myself to get better.”

Helderman wants to work on his shooting during the rest of his junior year to help him be prepared for senior year.

“I really need to work on shooting,” he said. “Free throws are up there too. My attitude is not always the best and I want to work on that as well.”

Helderman said he has been motivated my parents to always give his best effort in everything.

“They have always taught me to go hard in anything I do,” he said. “They taught me to give it 110 percent in everything I can do also. It has always carried over and I always think about what they tell me.”

Helderman wears no. 12 because he was not given a choice of numbers at first, but he said the number grew on him.

“I used to switch around numbers for a while,” he said. “I ended up picking no. 12 because it is kind of what I got stuck with last year and I just stuck with it and ended up liking it.”

Helderman said his choice of music on game days differ from his regular days.

“I have a ritual where I listen to music before then take a nap,” he said. “Then I will listen to music after I wake up. I like to listen to Juice WRLD, Travis Scott, Drake and the other big-timers.”