Nailed It or Failed It: Christmas Eve Confetti Pasta 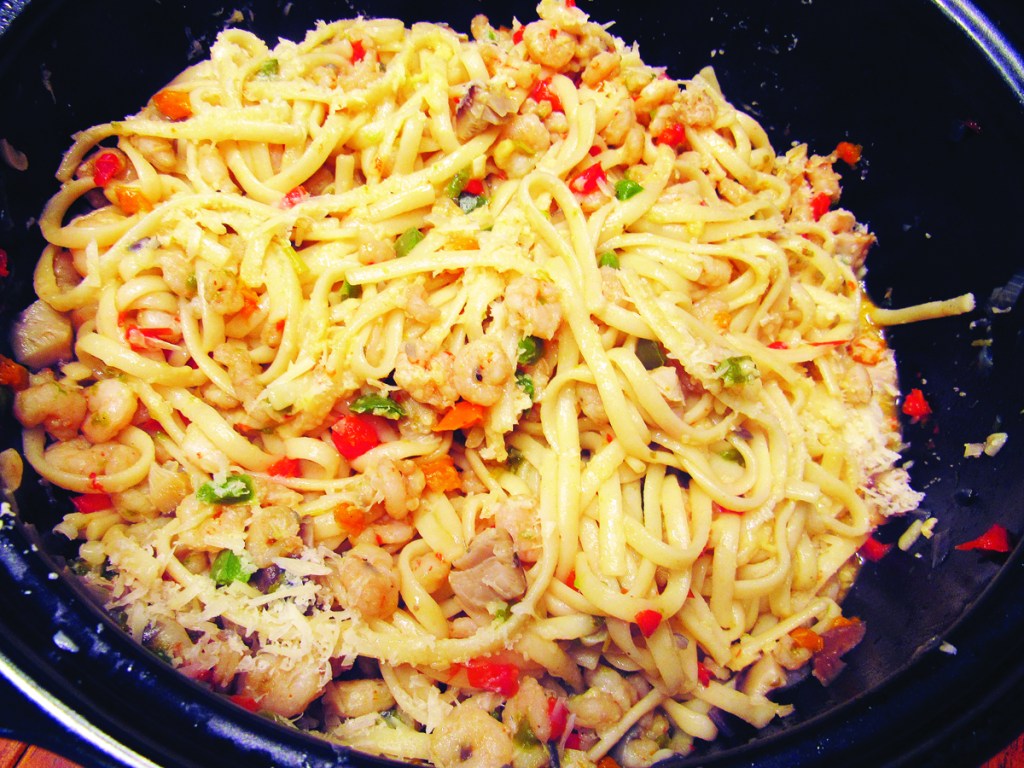 As I mentioned last week, I’m on the hunt for something different to prepare for supper, but it needs to be quick because Brad is recovering from hip replacement surgery and I’ve got enough to do without spending a lot of time in the kitchen.

While looking through my stack of recipes, I found today’s recipe for Christmas Eve Confetti Pasta, which came from www.tasteofhome.com.

When I found this recipe, the photo caught my eye. It looked delicious, and shrimp is one of my favorite foods, so I printed the recipe and filed it away.

Cook linguine according to package directions. Meanwhile, in a Dutch oven, sauté the peppers, onion, garlic and seasonings in oil until vegetables are tender.

Add the shrimp; cook and stir a 2-3 minutes longer or until heated through. Drain linguine, toss with shrimp mixture. Sprinkle with cheese.

Saturday afternoon, we decided to try this shrimp dish.

I already had shrimp in the freezer in anticipation of preparing this recipe. When I was looking for the shrimp at the store, I could not find small cooked shrimp. There was salad size, medium, large and extra-large. I even searched the labels in the freezer section and there wasn’t one for small shrimp.

I debated on buying medium or large and just cutting them in half, but decided the salad size would work just fine.

It would be easier because I wouldn’t have to spend time cutting them to make them the right size. Convenience and ease are at the top of my list for everything right now.

When it was time to start preparing for supper, I chopped the vegetables and then removed the shrimp from the freezer.

The package said the quick way to defrost was to rinse with cold water for five minutes. I placed the shrimp in a colander and ran cold water over them, then let them sit to drain while I started the water for the linguine.

About that time, I remembered we had shiitake mushrooms in the refrigerator and I knew Brad would like them added to this dish. He likes them added to just about anything.

While the water was heating, I put the oil, vegetables, mushrooms and seasoning into a Dutch oven.

The recipe calls for red pepper flakes, but I didn’t have any, so I substituted a dash of cayenne pepper.

While the veggies cooked, the water came to boil and I added the linguine. When I put all 16 ounces into the water, I wondered if it would be too much pasta for the rest of the dish. But I trusted the recipe and hoped for the best.

The vegetables cooked fairly quickly and I poured in those tiny shrimp. As they cooked, they released quite a bit of liquid. The recipe didn’t mention draining liquid from the shrimp and vegetables, but I wasn’t sure it was supposed to be so wet. I poured off the liquid, reserving it just in case.

When the linguine was done, I drained the water and started adding the pasta to the Dutch oven. Wow, that was a lot of pasta.

When I’d added about half of what I’d cooked, I stopped and tossed everything together.

At that point I knew I’d cooked way too much pasta. I also decided the dish probably did need the reserved liquid, because it contained a lot of flavor. I poured the liquid in and continued to toss everything.

While things were cooking, I grated some Parmesan cheese, sprinkled it over top and lightly tossed the dish again.

After Brad’s first bite, he said it was spicy. I hadn’t taken a bite and I thought that little pinch of cayenne must have gone a long way.

I took a bite and didn’t feel the heat. I didn’t think it was spicy.

We decided this dish is pretty good and we wouldn’t mind having it again.

I think you could double the amount of vegetables in it.

I’m sure it wouldn’t hurt to add other kinds of vegetables too.

We had asparagus in the refrigerator, and even though Brad is the only one who likes it, it would probably be something that would be a good addition to this dish.

I can add this recipe to my self-made cookbook. The only notes I’ve made are to not use so much pasta, and you can use any kind of pasta you have on hand, there’s no need to buy linguine.

If you are looking for a quick colorful dish for Christmas Eve, this just might be the one.

I hope you have a blessed Christmas.

Where in the World: Post office and place names