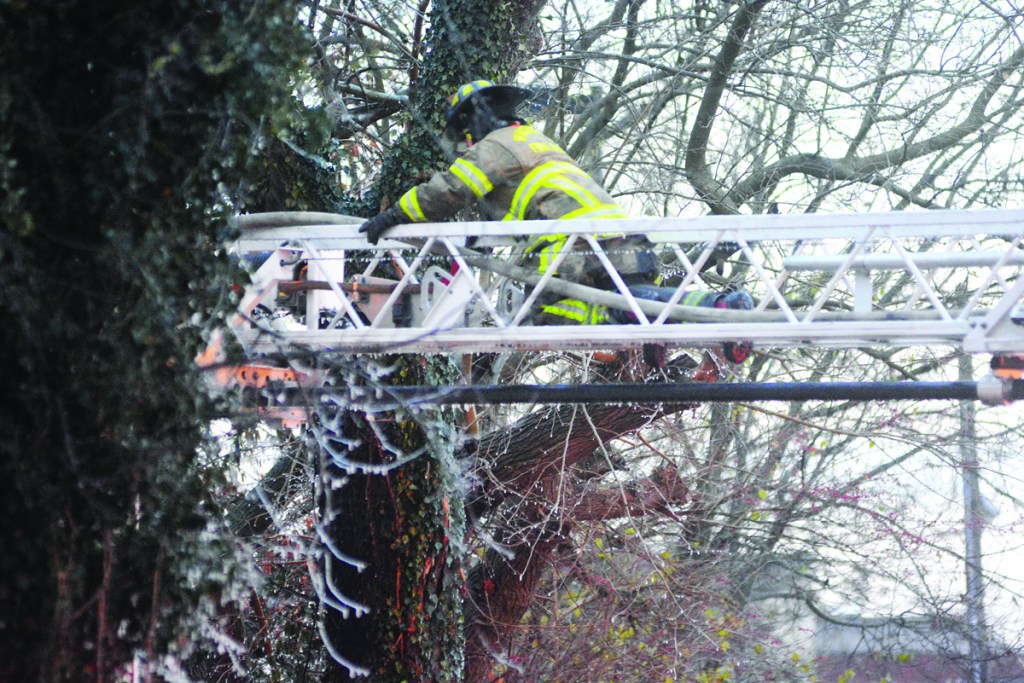 A Winchester firefighter climbs an icy ladder while fighting a house fire on Hickman Street in December 2017. Winter brings many hazards for fires and personal injury. (Sun file photo)

With winter officially here and Christmas in the past, it’s time to hunker down for a couple months of freezing temperatures and the likelihood of nasty weather.

For firefighters and EMS personnel, winter is one of the busiest times of the year, between increased risk of fires and people slipping and falling on the ice or snow.

It started this week as temperatures dropped, leaving intersections and bridges icy and leading to more than a few traffic accidents.

The risk of structure fires goes up as people try to keep warm as the temperatures drop.

Proper maintenance and cleaning goes a long way, whether it applies to furnaces or chimneys, he said.

Creosote, a byproduct from wood fires, can build up inside the chimney. If not cleaned regularly, it builds up and can ignite.

Chimney fires sometimes expand beyond the chimney itself and can cause significant damage, Bell said.

“Sometimes they can spread into the structure,” he said.

Adding space heaters provide another common source of house fires in the winter.

Heating is the second leading cause of home fires after cooking, and those fires peak in January annually, causing an average of 205 deaths each year.

Regardless of how they are fueled, space heaters should be at least three feet away from anything, including furniture and curtains, he said.

Anyone using non-electrical heaters, such as kerosene, should have a carbon monoxide detector in the home as well, Bell said.

“Anything that’s not electric, you want to make sure you have a CO detector,” Bell said. “They are very inexpensive, about the same as a smoke detector.”

Holiday decorations, additional heaters, electric blankets and other winter accessories can also overload electrical outlet and cause fires as well.

“We like to see one cord per (receptacle),” he said. “Any time you add extra cords, you increase the load on the outlet. Less is better.”

Once the snow arrives, another round of risks comes into play. If working outside, be sure to dress in layers and dress warmly.

There is always the danger of slipping or falling on ice, he said. Over-exertion is also a common problem, especially while shoveling snow, he said. Take frequent breaks and work for short periods. Doctors also recommend taking drink breaks to avoid dehydration.