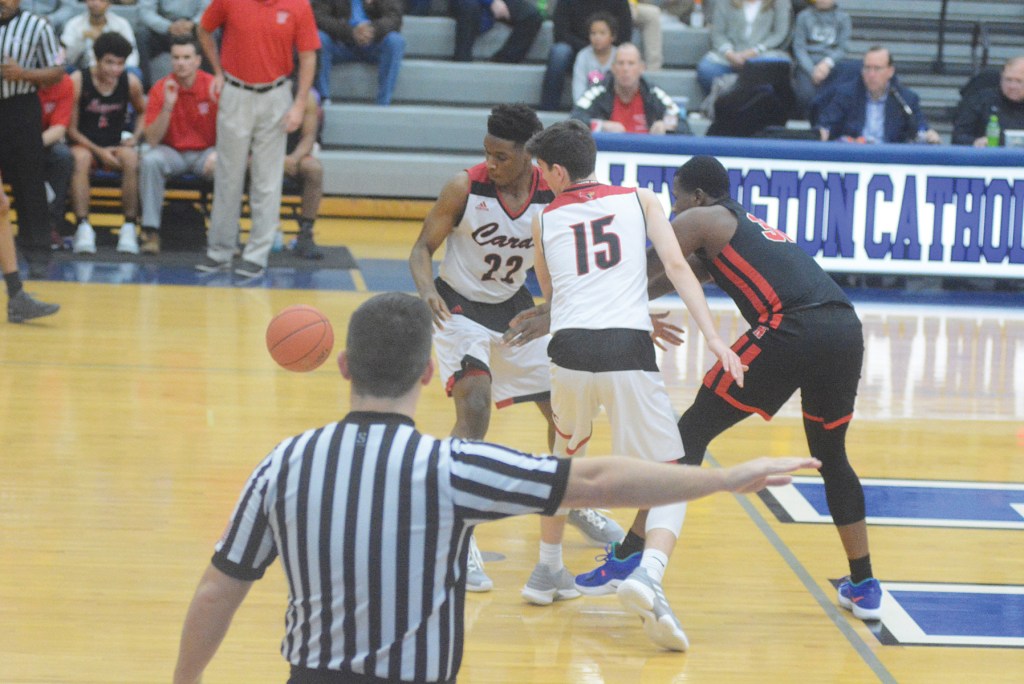 Jordan Graham (22) and Jared Wellman (15) force a turnover in the second half of GRC’s 65-62 overtime loss to Newport Thursday. (Photo by Micah Satterly)

The Wildcats snapped a five-game winning streak for the Cardinals.

The Cards ended the first quarter with a 22-12 lead as Brennan Canada posted eight first-quarter points and Lincoln Bush finished the quarter with six.

The tables turned quickly as Newport started the second quarter with a 12-2 run and outscored GRC 19-4 to take a 31-26 lead into halftime.

The game came down to the wire the entire second half as GRC could not regain the lead as the Wildcats ended the third quarter with a 46-41 lead.

The Cardinals finally got a break after catching back up as Jerone Morton sank a three-pointer just under four minutes left in the game to even the score 52 a piece.

Canada drilled a three with 57 seconds left to help give GRC a 57-55 and their first lead since the first quarter.

Newport got fouled on a shot on the other end and made both free throws to once again even the score 57-57.

Canada missed a three at the buzzer, but was called for traveling to send the game into overtime.

The Wildcats came out victorious.

Head coach Josh Cook felt his team lost their intensity in the first half.

“We got off to a great start,” he said. “Shots were falling and we were in a great rhythm. Newport came out and played well in the second quarter and played well. We kind of lost our aggressive mindset. We have to keep that mindset to where we are the aggressor. Newport did a good job of fighting back and getting in control. Our kids did a good job later in the game of coming back and showing some fight. We have opportunities, but we have to do a better job of taking control.”

Cook does not feel like his team did anything different Thursday night than they did in their previous winning streak.

Cook said his team has struggled to keep the same tempo throughout the game.

“We struggled to play the whole game,” he said. “We can’t do anymore looking and searching. We have guys that step up and lead in moments, but we need more consistency and ways to help push our guys and make them believe. As a coaching staff, we are searching for answers to help them find that. I think that is some things that the team needs to step up and do. We will learn and grow from it and those opportunities are great for February and March.”

Cook wants his team to bounce back and play hard in the next game and as long as his Cards do that, he will be satisfied.

“We have to step up and play,” he said. “You are going to play good teams over here. That is why you play in it. You want to come out and see what you can do. We will have to bounce back. We talk about trying to develop more toughness and that is something we need to do. This tournament can definitely make you a tough basketball team. Hopefully this will be a great experience for us where we learn from it and get ready to play the next day.”