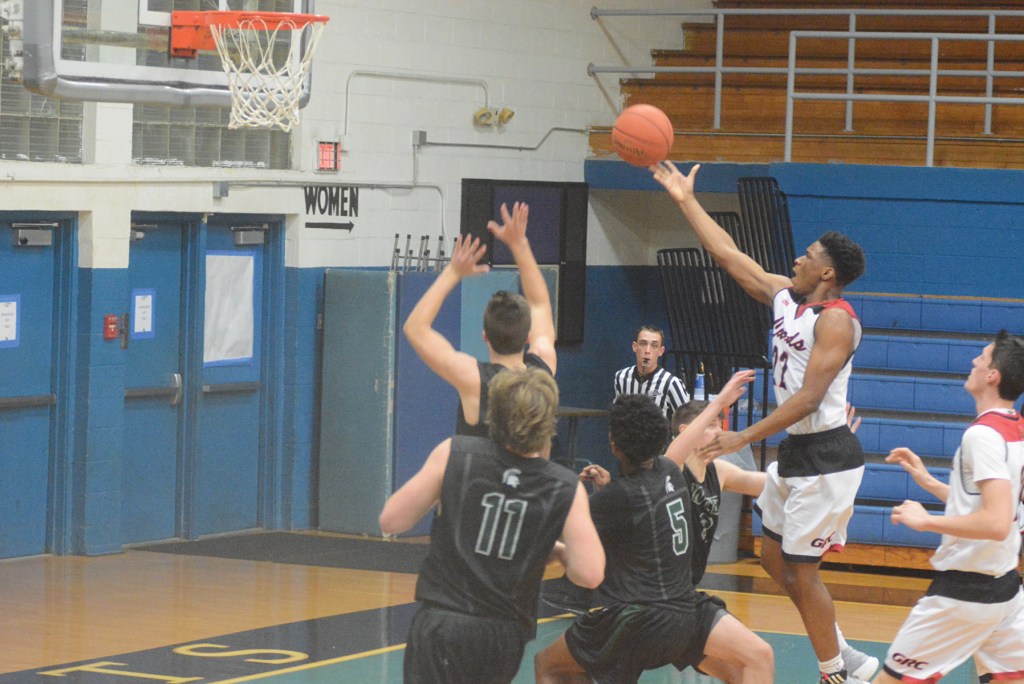 Jordan Graham attempts to lay it in but gets fouled. Graham led GRC in scoring with 20 points as the Cards took down Webb (TN) 55-49 in the Traditional Bank Holiday Classic at Lexington Catholic Friday. (Photo by Micah Satterly)

The George Rogers Clark Cardinals defeated Webb High School out of Tennessee 55-49 out of TN in the Cards’ second game of the Traditional Bank Holiday Classic at Lexington Catholic.

Neither team could get shots to fall as GRC lead 13-9 after the first quarter.

In the second quarter, Webb jumped out on a 7-1 run to take the lead and went into the locker room at the half with a 23-20 lead.

The shooting strxuggles continued in the third quarter as Webb still led 33-30 to enter the fourth quarter.

Both teams traded baskets in the fourth and either team could have gained momentum to seal the game.

With three minutes left to play, Jared Wellman drilled a three-pointer to give the Cards a 41-40 lead, which was their first lead since the first quarter.

The game was knotted up at 42 a piece until Wellman hit his second three of the quarter to help the Cards retake the lead 45-42 with under two minutes left.

After forcing Webb to turn the ball over, Jordan Graham was fouled and sent to the line as the rest of the game’s fate was at the foul line for GRC.

Graham said it felt good to get a win under their belt.

“We played a lot better,” he said. “We still had some guys struggling, but overall, we stepped up and everyone played hard. We closed out the game. We had a tough one last night in a game we probably should have won. We came back motivated and got a win tonight.”

Graham said his team was able to come back and to steal the game because it is something the team has been working on.

“We have been trying to figure out how to play for four quarters,” he said. “We will have a good first quarter then the second quarter we will come out flat and lose the lead. We are trying to work together to come together for four quarters and play our best. We are getting there and we closed out strong. I am proud of my guys. Everybody fought, we talked and we did everything we could to pull out a win against a tough Tennessee team.”

Graham said GRC will need to get plenty of rest to finish the rest of the tournament Saturday and Sunday out strong.

“It starts tonight,” he said. “We need to get home and get some food, some fluids and go to bed. We have to start it tonight then tomorrow we will come in early and probably have a shoot around and walk through. We will probably try to watch film on who we play. This is kind of like the postseason. It is tournament time and we have to quickly figure out what to do. We are going to see what we will do.”

Graham led the way with 20 points and Wellman posted 13 points.