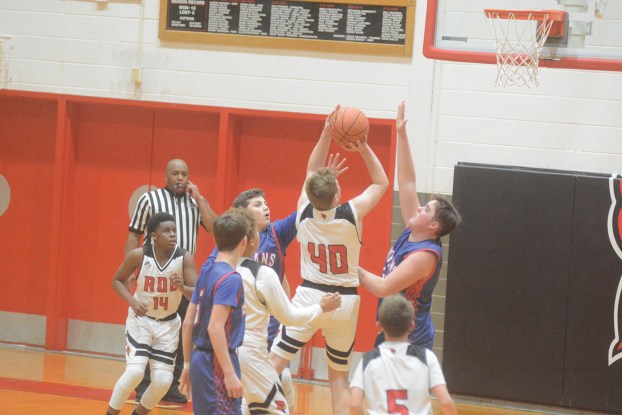 Brady Davis goes up for a lay up in the eighth grade’s 47-37 victory over McNabb Thursday. (Photo by Micah Satterly)

After trailing 12-11 after the end of the first quarter, the Cards stormed back scoring 14 points in the second and held McNabb to only three points as RDC jumped out 25-15 at the half.

McNabb turned the tables to open the third quarter as the Indians went on a 6-0 run to pull the game back within reach.

RDC’s full-court pressure was too much for McNabb as the Indians gave up countless opportunities for the Cards to turnovers into points.

RDC jumped back out and held a firm 36-26 lead after three quarters of play and ran away with the game.

Eighth grade coach Dwain Gay said him and his team were ready to get back to business after returning from the back.

“We have been excited to get back,” he said. “Anytime you come off a break there are things that happen unexpectedly. We were aggressive and I thought our defense forced a lot of turnovers. We set the tone doing that. When we do that, our offense flows a little better.”

After trailing in the first quarter, Gay said his team was able to pull away with the lead because the Cards let the game come to them instead of forcing plays.

“We were a bit more patient,” he said. “We were able to spread them out. I feel like our quickness allowed us to get to the goal and get us some penetration. We did not turn the ball over as much.”

Gay said it is sometimes a struggle to keep everyone focused after returning from the back from the break, but he feels like his team has kept the same intensity as before.

“When you are off for the break and not playing games, it is hard to keep guys motivated and want to work,” he said. “We try to make practice as fun as possible and we do a lot more scrimmaging. We add a little more wrinkles to our offense and add some defenses. We keep things interesting and make them want to be in the gym more.”

Gay is focused on keeping the same hunger and intensity as the season draws closer to ending.

“We want to continue to get better,” he said. “We want to make sure our chemistry keep improving. As we move closer to tournament time, teams will start to figure out things. They will adapt to some of your offenses and defenses. A lot of times basketball is all about making plays and getting to the rim. If our chemistry continues to stay the same and guys keep working hard then we have a shot to do something big.”

George Rogers Clark junior John Gwynne said he has been playing basketball since he was four or five years old.... read more