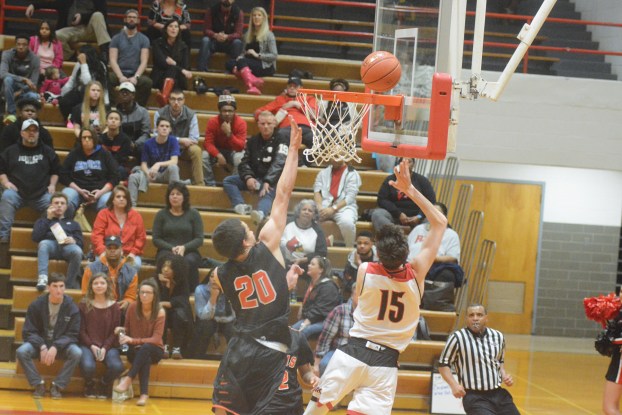 Jared Wellman finishes a lay up late in the fourth quarter after catching a lob. (Photo by Micah Satterly)

The George Rogers Clark Cardinals defeated Paris 68-40 in the two teams’ second match up of the year and GRC’s first home game since Dec. 11.

Brennan Canada and Jordan Graham scored the first four points of the game to jump out ahead.

The Greyhounds went on to answer as they scored the next five points to take the lead, but the streak ended there.

After a GRC steal, Graham went up for a dunk and got fouled.

The Cards opened the second quarter on a 7-1 run and continued to control the pace from there as they posted 23 points in the quarter and held Paris to 9 as GRC lead 35-16 at the half.

A whopping 50-25 Cards’ lead allowed head coach Josh Cook to give his starters a break throughout the rest of the second half.

Cook was thought his team’s effort was exactly what he asked for.

“To be back and to have a great crowd like we had was exciting,” he said. “The girls played before us and I think our guys were excited to be back and play at home. Paris is always a good basketball team and I thought we still have things to work on, but when you can start off 2-0 against Paris who had a really great run in our district the past five years is a really good start for us.”

Cook said his team was able to stretch the lead in the second quarter from the defensive side of the ball.

The Cards are headed to Lincoln County Saturday to face Wayne County, one of the top teams in the 12th Region, in the Patriot Classic.

Cook admits it is going to be a tough test for his team.

“It is going to be a good one,” he said. “They are well-coached. They play with a lot of pride and always believe they can win. They have a really good basketball team and I like how they are pieced together. It is definitely going to be a challenge for us and we have to get our minds right to get ready and go out and play.”