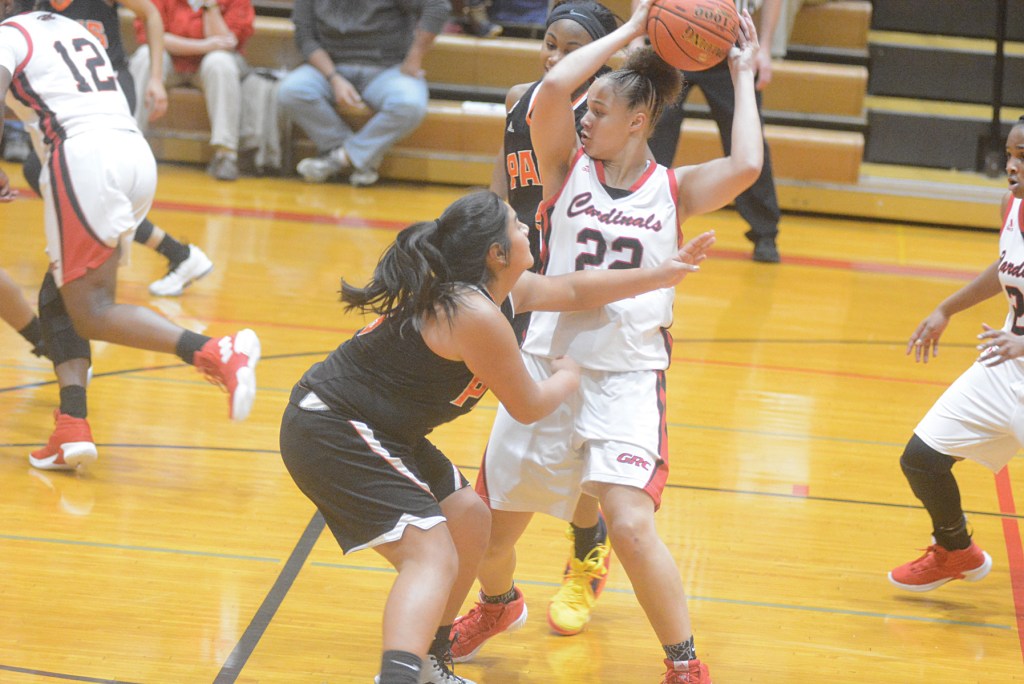 Tyra Flowers gets a rebound and looks up the court. (Photo by Micah Satterly)

The George Rogers Clark Lady Cardinals faced Paris in their first home game since Dec. 5 and came out victorious with an easy 63-35 win over the Lady Hounds.

The Lady Cards were hot early as Jasmine Flowers knocked down a three-pointer in the corner to steal a quick 3-0 lead.

Maleaha Bell knocks down two free throws the next possession and GRC manages to quickly get a steal on Paris’ inbounds as Tyra Flowers gets an easy lay up to go up 7-0.

The Lady Hounds were forced to call quick a timeout.

The tempo did not slow down for GRC as they led 20-5 after the first quarter and did not look back.

The Lady Cards outscored Paris 24-7 in the second quarter for a 44-12 halftime lead.

GRC continued to add on the score to give the game a running clock and head coach Robbie Graham cleared the bench for most of the second half.

Graham was pleased with the district win.

“I thought we came out with the aggression we wanted to,” he said. “We had some good practice sessions and I thought we played well. We were very aggressive defensively and got our hands on a lot of balls. We knew they were going to come out in zone and we wanted to beat them out of it and get easy baskets. We were able to drive and get towards the rim whenever we forced them out of the zone.”

Two of those losses were back-to-back in December as GRC had three starters suffer injuries and were forced to sit out.

Graham said the adversity allowed his team to figure out the depth of the squad.

“It is kind of the next-man-up type of thing,” he said. “There is nothing you can do about it when it comes to those types of things. You have to continue to play. What it does is it gives our younger players the opportunity to earn some minutes. We tell them all the time you are just a sprained ankle away from playing no minutes to playing 15 to 20 minutes. So I tell them you have to be ready. One thing we do in our practice sessions is coach everybody. We don’t coach five or six. We want them to play hard every opportunity they get when they get out there.”

GRC is heading to New Castle, IN Saturday to compete in the Indiana-Kentucky Challenge Cup.

The Lady Cards will face Northwestern (Kokomo) at 12:30 p.m. and Graham said the game will be a tough battle for his team.

“We are playing in New Castle gym which is the largest high school gym in the country,” he said. “We are excited to be a part of the Indiana-Kentucky Challenge. Walton-Verona, Male, Henry Clay and Madison Central are the teams playing alongside us. We are looking forward to playing in that event.”