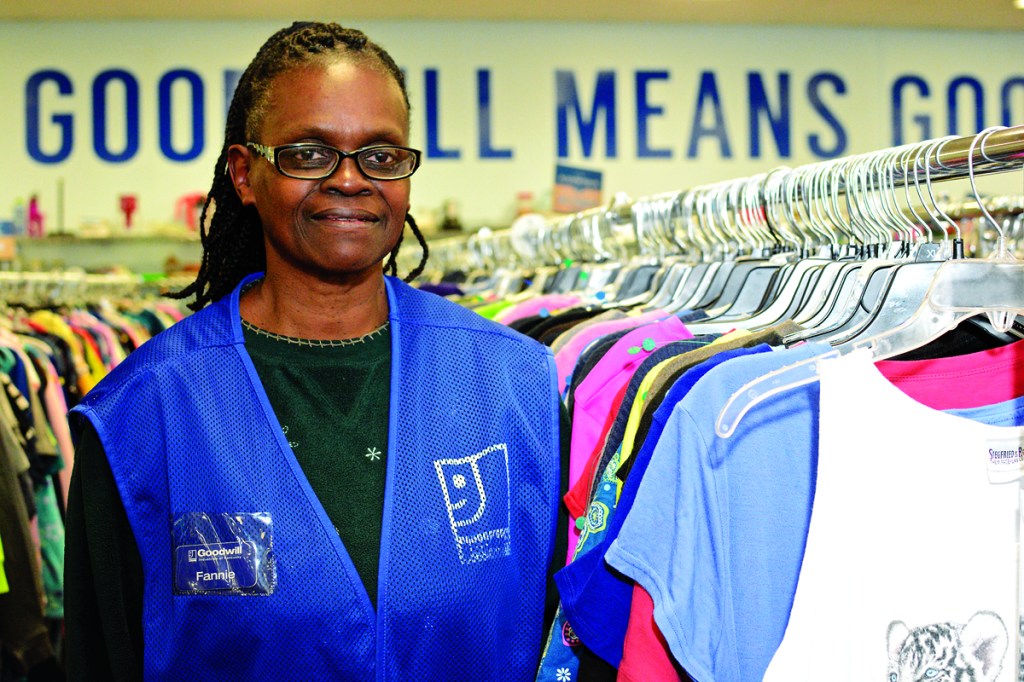 Fannie Stonestreet currently works part time at Goodwill, but her manager Ron Pike said many customers come in asking to see if she is there as she always knows how to lift people's spirits. (Photo by Lashana Harney)

Fannie Stonestreet, wearing her blue vest paired with a big smile, said she has worked for Goodwill since it first opened in April 1998.

The nearly 22-year streak makes her the longest-working employee at Winchester’s Goodwill.

Before working at Goodwill, Stonestreet, a Lexington native, said she had many jobs over the years, having worked at a Holiday Inn, Red Lobster, a nursery and more. However, she was referred to Goodwill in the late 1990s, marking the start of a long career.

Stonestreet’s manager, Ron Pike, said many customers come in asking for her as Stonestreet is well-known for her contagious laughter and ability to lift people’s spirits.

Though, Stonestreet said she always tries to be early. Sometimes, she arrives too early, she said.

Outside of work, Stonestreet participates in Special Olympics through the STRIDE program.

Stonestreet is a high-achieving athlete in the 200 m Relay Race and has won several awards, even traveling out of state to compete.

Stonestreet has participated in STRIDE, which stands for Supporting Therapeutic Recreation for Individuals with Disabilities Everyday, since it began in 2000.

“I want to do better than I’m doing now,” Stonestreet said.

“The career coaching program is Goodwill Works Kentucky, and what we do is we help internal employees and external participants as well to increase their job skills,” Martin said. “We work with soft skills. We also work resume building, on the job training for Goodwill employees, helping them become more efficient and helping them to set and attain goals so they can increase their work experience.”

Martin said the goal is to help participants either move up within Goodwill or to help them find better jobs elsewhere.

“Sometimes we view turnover as a good thing because someone comes into Goodwill, and we job train them and give them skills and we help them exit,” Deitering said. “ … Anytime we can get someone into a better job, that’s positive. And we do that with the overarching mission of reducing Kentucky poverty through employment.”

Since Deitering first met Stonestreet about five years ago, she has seen Stonestreet transform from shy and reserved to outgoing and social.

“Her language has improved so much just in those short few years,” Deitering said. “She’s come a long way.”

Deitering said most of Goodwill’s 1,300 employees in Kentucky have a disability or other challenge, and Goodwill assists their employees to resolve barriers that have kept them from working.

“It feels good,” Stonestreet said. “I’m not rich, but I ain’t gonna ever get there.”

Stonestreet said she couldn’t imagine not having a job; she said it gives her a purpose and something to keep her from the monotonous boredom that sitting at home brings.

Pike said he’s happy to have someone like Stonestreet on his team.

“It’s kind of like she brings this uplifting spirit to the team, and it really is a breath of fresh air to see Fannie walk through the doors,” he said.

Stonestreet said she plans to stay at Goodwill as long as they will keep her. Her blue vest and bright smile aren’t going anywhere any time soon.