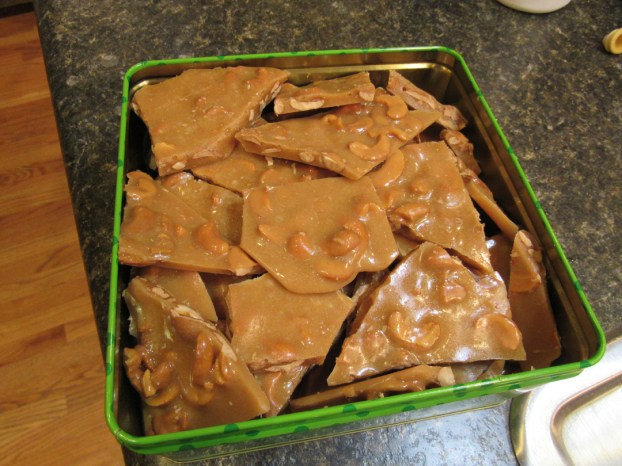 Nailed It or Failed It: Cashew brittle

It was Christmastime, and I’d not made any Christmas treats when I found roasted, unsalted cashews at the grocery in a reduced bin.

I bought two packages with the intent of making cashew brittle. I love cashews, and I love brittle, so the combination seemed lovely.

A long time ago, I made peanut brittle in the microwave, but a couple of years ago I tried it and ended up throwing three batches in the trash because either it burned, didn’t harden or didn’t turn out right.

I decided I would not use the microwave to make brittle again; it was a waste of my time and a waste of ingredients which equals money.

My Aunt Carolyn makes delicious peanut brittle, and she makes it on top of the stove. I knew I had to find a recipe for cashew brittle that didn’t require a microwave.

A few days before Christmas I had a little time and started looking through my stack of recipes to find a one for cashew brittle.

At the bottom of the pile, I found a couple and for no particular reason, chose the recipe from the December/January 2010 “Taste of Home” magazine.

I pulled out a heavy-duty pot that Bonnie Hardy, a dear friend, gave me several years ago. She said it was a great pot to use when making candy.

I dug around in my baking utensil drawer and found my Taylor candy thermometer, a recommendation from Bonnie.

I like this thermometer because it clips to the pan and has a guide on the bottom that sits right on the pan which gives you a good temperature reading, and you don’t constantly have to check to make sure the thermometer isn’t resting on the bottom of your pan.

I greased a large baking sheet and set it aside, then pulled one package of the cashews out of the cabinet.

They weren’t halves, so I broke them all in half, which took way too much time.

Next, I poured the sugar, syrup and water into the pot. I stirred the mixture until the sugar dissolved. I attached the candy thermometer and turned on the heat.

I stirred the mixture until it started to boil then I added the cubed butter.

When the temperature finally reached the soft-crack stage, I poured in the cashews.

The mixture was stiff, and it took some arm strength to get all those nuts mixed in, but I finally did it.

The candy continued to cook, and I continued to stir until the thermometer read 290 degrees. Again, this took longer than I wanted.

I removed the thermometer and began pouring the hot mixture out onto the buttered pan. I scraped every last bit of golden-brown candy out of the pot and spread it with a wooden spoon.

After a few hours, the brittle was cool, and I began to break it up.

It didn’t look like My Aunt Carolyn’s brittle, so I was skeptical.

After breaking all of the candy into manageable pieces, I took a bite.

It tasted great, but not like brittle. It reminded me of toffee.

I’ve never made toffee, but I’ve often thought I’d like to try.

I love toffee because it’s sweet and doesn’t involve chocolate.

Brad wasn’t going to try this sweet treat because he doesn’t care for brittle, and he doesn’t like this kind of candy — it’s way too sweet for him; so I took some to my co-workers, and it got good reviews.

I also took it to my co-workers because I was the only one at home eating it.

Who needs that much brittle?

I have no willpower and would have eaten every piece of it.

This recipe took a lot of time to make and wasn’t what I was expecting because I wanted brittle, but overall it is a winner, and with patience in the kitchen, it’s a Nailed It recipe.

I will add it to my self-made cookbook.

Now that the cashew brittle/toffee is almost gone, I’m ready to try one of the other recipes I found and see if it is more like the consistency of brittle.

If it’s as good as this, I’ll need to share it with someone.

In a large saucepan, combine the sugar, corn syrup and water.

Bring to a boil, stirring constantly.

Cook and stir until a candy thermometer reads 280 degrees or a soft-crack stage.

Remove from the heat; stir in baking soda.

Store in an airtight container.

Nailed It or Failed It: Best Ever Sloppy Joes

In my quest to find quick and easy meals for supper, I ran across today’s recipe for Best Ever Sloppy... read more