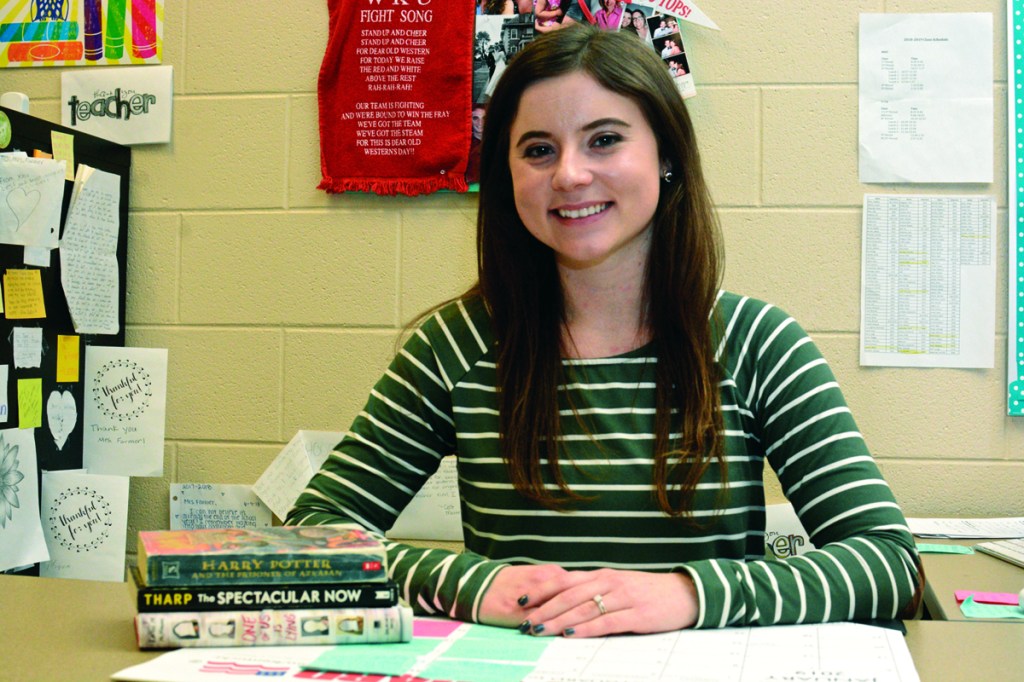 For the past three years, Mara Farmer has had one primary goal for her students: inspire them to love reading.

Farmer, a Louisville native, is now an English teacher at George Rogers Clark High School. Her courses specifically focus on reading, mainly helping students who may not be reading at the level they should.

Farmer earned a bachelor’s degree in English for secondary teachers from Western Kentucky University and is currently pursuing a master’s degree in library science at the University of Kentucky. She was a first-generation college student and has maintained all A’s throughout her entire education.

Farmer’s mother had been an assistant teacher in a kindergarten class; Farmer said she thinks that partially influenced her decision.

But Farmer usually had her nose in a book, getting lost in fantasy worlds painted across the pages. She said she still retains her love for novels.

“English has always been my favorite class,” Farmer said.

When she first started as a teacher in 2016, Farmer said she hadn’t fully realized the scope of her responsibilities.

“We have to wear a lot of hats as a teacher,” she said. “I don’t think you realize you’re going to be a counselor, worker and teacher and motivator.”

Farmer said her favorite part about being a teacher is seeing her students excel.

“It’s nice to see them grow over the course of a year,” she said.

It can be challenging to make reading enjoyable for students who may have always disliked reading.

But when she does flip a student from hating reading to loving it, it makes Farmer remember why she became a teacher in the first place.

“In my class, I want them to see that reading doesn’t have to be torture,” Farmer said. “So every year at the beginning of the year, so many kids will make it very clear and loudly, they hate reading. It’s the worst. And then we read our first novel of the year, every year the kids get so into it. And I’ll hear these kids that was vocal at the beginning saying how much they hated it, now saying it’s pretty good … So just seeing that change.”

Farmer said she hopes her students remember how much she cared for and invested in them, and she advises new teachers to do the same.

“My advice would be to make sure the kids see you as somebody who cares about them,” Farmer said. “ … Make sure you first show them that you care about them and that you want to know what’s going on with them. And you want them to be successful.”

Farmer said she sees a lot of apathy and negativity from some of her students, and one of her goals this year is to bring more positivity into the classroom.

“I realized that a lot of these kids might need someone to be a light in their lives,” Farmer said. “And so my No. 1 rule this year, which is new this year, is to be kind and don’t complain. And so I’m doing this thing this year with them, where they can write warm and fuzzy notes to each other anonymously, or whatever, and they can give those to me, and I’ll pass them out to the kids who got them to promote that positivity.”

In her spare time, Farmer loves to travel with her husband, bake and of course, read. Last year, she read 45 books, setting a new personal record. Some of her all-time favorite books include Khaled Hosseini’s “A Thousand Splendid Suns” and Chimamanda Ngozi Adichie’s “Americanah.”

In regards to her plans for the future, Farmer said she thinks she wants to work as a librarian in a school eventually. But for now, she’s working on giving her students the best advice: keep reading.