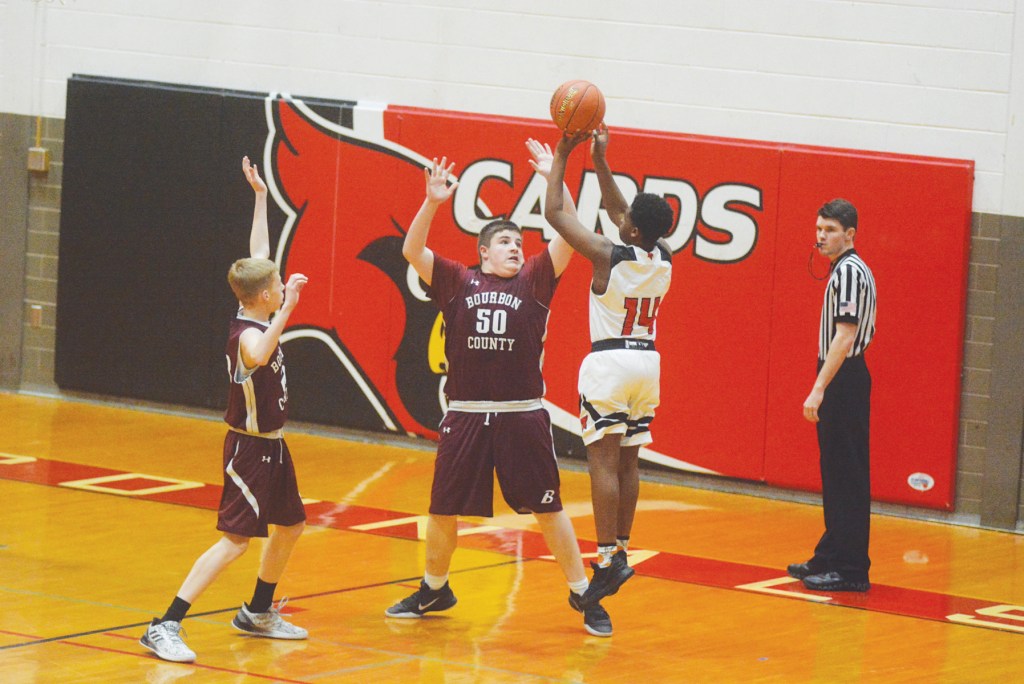 Reshaun Hampton shoots a jumper and makes the shot. (Photo by Micah Satterly)

The eighth grade team had no trouble pulling out a victory as they won big 53-22.

The Cardinals held the Colonels to 10 points in the first half as RDC had a commanding 34-10 lead.

The second half was no different as the Cards held Bourbon to just 12 points as RDC posted 19.

“We were really focused coming out,” he said. “Our goal this time around was to beat everybody around the side and get ourselves second place. We have been focused. Bourbon is a really good team and has a really good point guard. We wanted to try to contain him and our guards did a good job of that. Our big guys crashed the boards hard on misses and we dominated the rebounds.”

Gay said his team gives their 100 percent effort at all times because they know the talent they possess.

“We know what we are capable of,” he said. “We are capable of winning our conference’s championship this year. They are realizing it more and more each game. They are striving in practice to get better. Guys are dedicated, committed to it and it’s translating over to our basketball games.”

Although Campbell won by 31 points, Gay said there is still a lot to improve on.

“Our half-court offense still needs work,” he said. “We were lucky enough to pressure the ball and make it a transition game. At some point, we may have to go to a slow-down game and execute in our half-court offense. We need to be ready for it when that time comes.”

Gay said it can be difficult to keep his team focused when they have a big lead, but also said each player knows their role and takes responsibility.

“We make sure all our kids know they are accountable,” he said. “Regardless of the score or situation, every kid that comes in the game will be held accountable and know that their role is to compete and stay in our system. They know to do what is best for the team.”

Jaden Nein uses other sports to become a better…