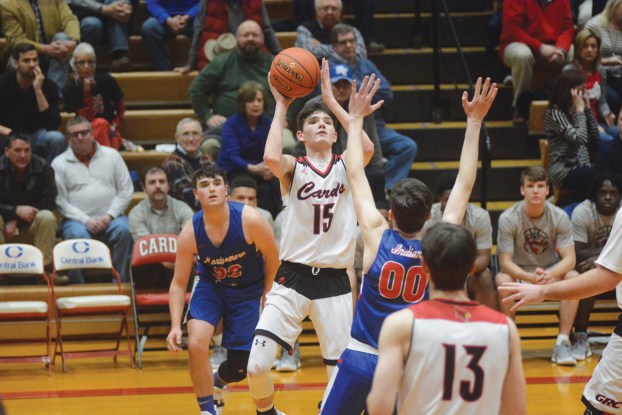 Jared Wellman shoots a floater and makes the shot in GRC’s 80-46 victory over Montgomery County Friday. (Photo by Micah Satterly)

The smell of popcorn smothered the gym and the band drums were beating intensely Friday night.

Both teams continued to trade baskets in the first quarter as the Cardinals withheld a 15-14 lead.

Just minutes after Jordan Graham was presented his 1,000 career points game ball, Graham scored the first basket of the game.

The Indians quickly answered with a three-pointer on their first possession.

Graham scored the next bucket for the Cards to retake the lead.

Montgomery drilled two threes on their next two possessions for six unanswered points.

Jehdon Jenkins was rewarded with an and-one on the next trip down the floor for GRC to get the crowd back on its feet.

The Cards went on a 9-0 run before ending the first quarter.

GRC caught fire in second quarter after going on a 15-2 run to extend their lead 30-16 to force an Indian timeout and that fire continued to blaze for the rest of the game.

Montgomery came out of the timeout with five straight points to cut the deficit 30-21.

With three seconds to spare until the halftime buzzer, Jared Wellman caught the inbounds pass and dribbled to half court before launching it at the rim and somehow managed to sink the shot to once again extend the lead 33-21.

The Cards kept their foot on the gas throughout the second half before going up 20 and coasted the rest of the way.

Graham drilled three of his four three-pointers on back-to-back-to-back possessions in the fourth to seal the game.

Head coach Josh Cook thought his team played excellent in the first meeting against their rival.

“I thought our kids played well,” he said. “There was a lot of great energy and emotions. We honored some important people tonight and Jordan (Graham) was acknowledged for his 1,000th point. It was a special night that hopefully we will remember. I am proud of our kids and hopefully it is something our seniors remember. It was a great crowd and our kids played really well.”

GRC will have to quickly come back down to earth as they will host 2-14 Bryan Station Saturday.

Cook said he has given his team a curfew Friday night to stay level-headed and to keep them focused.

Tipoff Saturday is set for 7 p.m.

Graham finished with a game-high of 29 points, Wellman and Jehdon Jenkins both finished with 12, Brennan Canada posted seven points and Jerone Morton had nine points.