Lady Cards conquer Indians, rotation back to normal for GRC 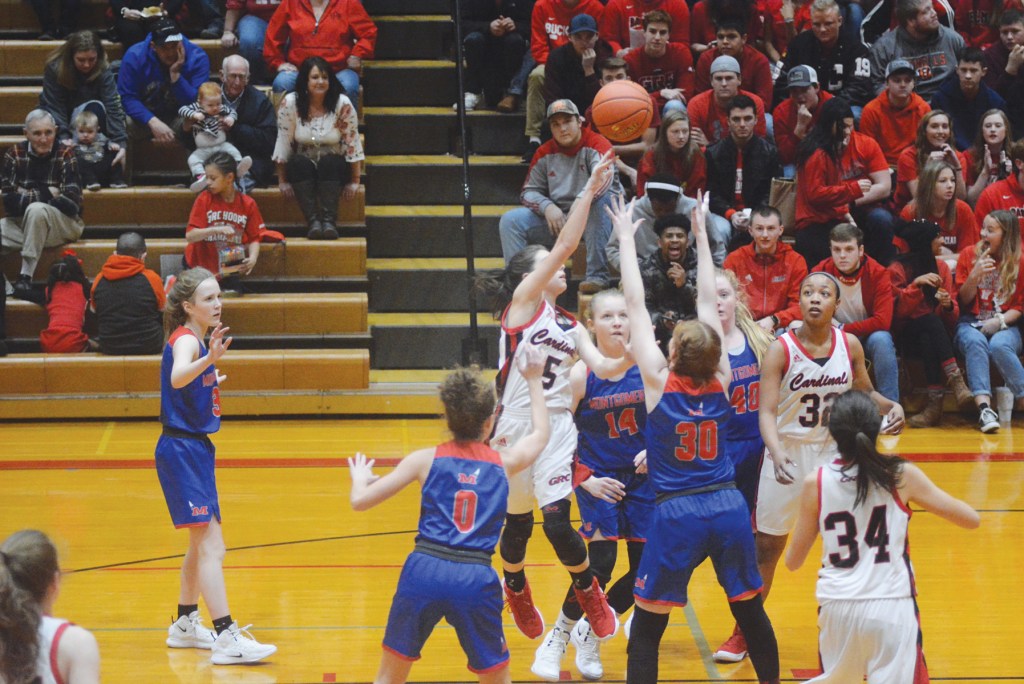 Erica Berry flips up a shot at the rim in the Lady Cards’ 74-20 win over Montgomery County. (Photo by Micah Satterly)

The George Rogers Clark Lady Cardinals had no issue coming out with a victory over Montgomery County 74-20 to improve to 11-4 and 2-0 in the district.

The Lady Cardinals led the Indians 52-5 at halftime with the Indians’ only points came from the foul line and did not make a single shot from the field in the first half.

GRC continued to pound on the Indians throughout the rest of the game and sat the starters for the entire second half.

“I thought we played hard and did some really good things,” he said. “There still some things we still need to tighten up on. We missed a lot of easy shots in the first half, missed a couple block-out assignments and some defensive rotations were kind of slow. It was good to get back on the court because we haven’t played for a while. It was good to be back home because we have been on the road. Anytime you can beat your arch rival in a district game is a good thing. We are excited to get everybody back, but we are still waiting on Cameron (Anderson). We are finally able to get our roster put back together again.”

The Lady Cards have struggled recently with injuries to some key players for most of the month of December.

Those players finally found their way back into the rotation again and Graham said it felt good to get the rotation almost back to normal.

“Looking up and seeing Kennedy (Igo) running out in the starting lineup was a great feeling,” he said. “Everybody did their thing when she was out and we had to kind of do things we weren’t used to. Everybody had to fill in and do what they could. We are just better when she’s on the court. No offense to anybody on our team, but we are glad to have her back.”

GRC was supposed to host Conner Saturday but was canceled due to the anticipation of a snow storm.

The Lady Cards will hit the road Tuesday for another 40th District matchup against the Bourbon County Colonels.

GRC will have their hands full next weekend as they head to Scott County for the Toyota Classic and will have to prepare for 12-2 Lincoln County, a rematch against 9-6 Simon Kenton and ending the tournament with a matchup against a perfect 16-0 Scott County team.

Graham said next week has a state tournament vibe to it.