Nailed It or Failed It: Marinated baked pork chops 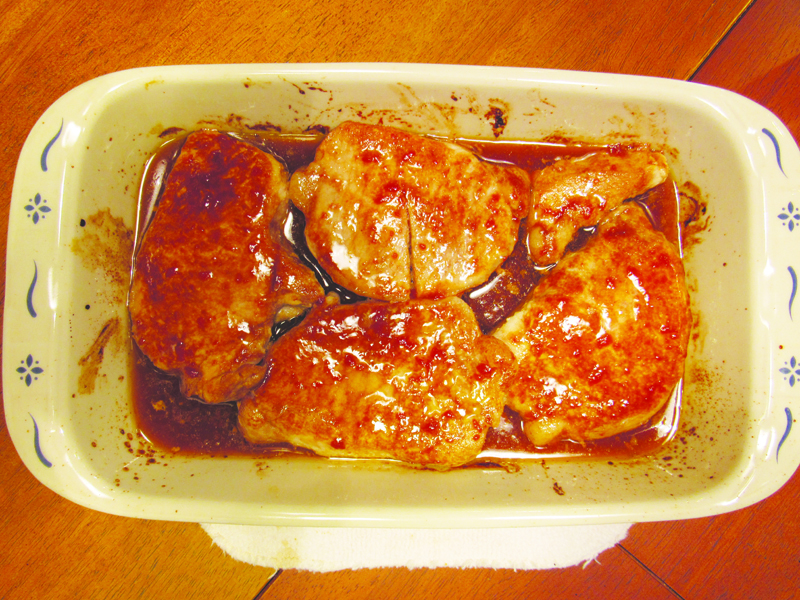 I was looking through my stash of recipes again when I found this recipe for marinated baked pork chops.

I’d printed the recipe off the www.kitchme.com, which gave credit to allrecipes.com.

I’ve had good luck with recipes I’ve tried from All Recipes.

I was just looking for something easy to prepare after a day at work.  Brad is still recovering from his surgery and I don’t want to spend a lot of time in the kitchen in the evenings.

I pulled a few recipes from my stack and then handed them to Brad. When he chose today’s recipe, I thought the looked good, and we already had a package of pork chops in the freezer.

Place pork chops in a medium baking dish and spread with half the sauce.

Bake pork chops for 3 minutes in the preheated oven. Turn over and spread with remaining sauce and continue baking until the internal temperature of the chops reaches 145 degrees.

I was surprised the title called them marinated when they did not marinate at all. Webster’s said marinate means to steep in marinade. This recipe didn’t mention steeping the pork chops. But I was game to try them anyway.

When I got home from work, I gathered all of the liquid ingredients for the sauce and mixed them in a two-cup measuring cup.

Even though I was only going to bake four pork chops, I prepared the entire recipe of the sauce.

After the ingredients were mixed, I was a little concerned because there wasn’t much sauce in the cup.

I placed the pork chops in an oblong dish, poured half the sauce over the top and put the chops in the oven to bake. T

hen I went about getting a couple of side dishes ready: baked beans and Parmesan mac and cheese.

The house was soon filled with the great scent of baking pork chops.

I was pretty hungry when the timer sounded after 30 minutes.

I opened the oven, flipped the chops and poured the rest of the sauce on them. I closed the oven door and set the timer for 15 more minutes.

Since I’m not one to eat meat unless it’s well done, I sliced one of the chops to make sure they were ready to come out of the oven.

After Brad blessed the food, I cut into my pork chop and took a bite, as did Brad.

Brad and I agreed these were just OK.

To me, they just tasted like pork chops with barbecue sauce on them.

I didn’t think they were that tender either. They weren’t tough, but they didn’t melt in my mouth.

The next night I re-heated the two leftover pork chops, along with the remaining sauce; the little bit of sauce this recipe made ended up being plenty for this dish.

To my surprise, the pork chops were much better the second go around.

They were a lot more tender and seemed to had more flavor.

Maybe that was because they marinated in the sauce overnight or they cooked longer. Who knows?

After day two I’d say I nailed this recipe.

I’m not quite sure if it’s going to make it into my self-made cookbook, though.

I’ll have to think about it.