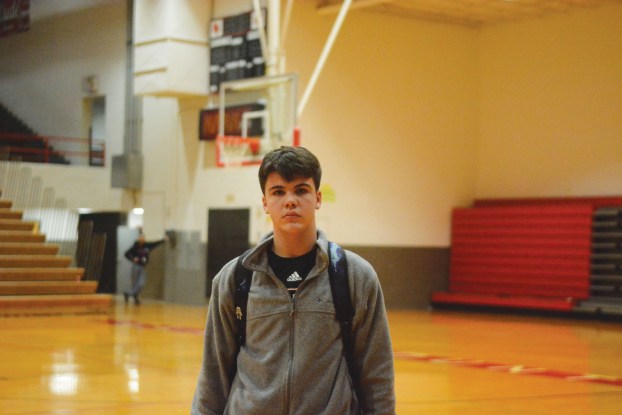 Skylar Deskins is motivated by Kobe Bryant and wants to be just as relentless on the court. (Photo by MicahSatterly)

Skylar Deskins is an eighth grader at Robert D. Campbell Jr. High and has been playing basketball since first grade.

Deskins also played football until he suffered an injury and decided to stick to basketball.

“Some of the bad injuries in football are bad,” he said. “I have hurt my leg before, but people suffer brain damage and I just decided I didn’t want to risk that. I have a natural love for basketball. I just love to play it.”

Deskins said his strength in basketball game is posting up on the offensive end.

“I can seal a defender and post up on the block pretty good,” he said. “I can pass it out of the post if I get double-teamed to find an open teammate.”

Deskins admits he wants to work on his overall game.

“I don’t feel confident enough in my ball-handling and shooting,” he said. “I want to keep learning more but the game overall so I need my basketball IQ up.”

“He inspires me in many ways,” he said. “He refused to give up and never got tired. His mamba mentality is powerful and I have always been motivated by that.”

Deskins recently picked up no. 31, but would prefer a different number of choice.

“I wanted no. 3,” he said. “Chris Paul is my favorite player. I wanted to get the same number but I couldn’t.”

Brady Denham has been playing basketball since he was seven years. He also plays quarterback in football and said it... read more