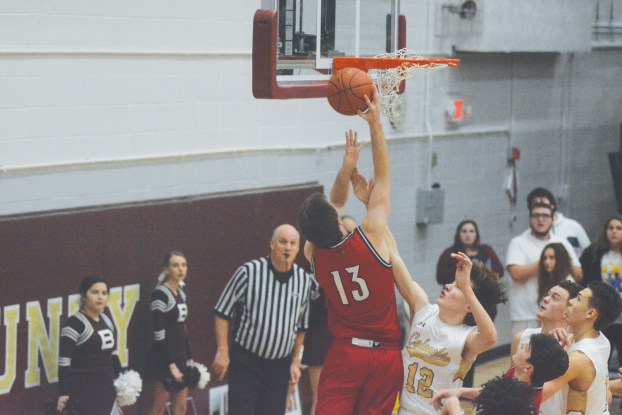 Brennan Canada gets fouled on a lay up attempt in the second half. (Photo by Micah Satterly)

The George Rogers Clark Cardinals received all they could handle Tuesday as they pulled away in the second half for a 73-51 victory over the Bourbon County Colonels.

The two rivals traded buckets for the first quarter as GRC managed to escape with a 12-11 lead.

Both teams lit up the second quarter with the Cards posting 19 points for the quarter and the Colonels put 14 more on the board as GRC led 31-25 going into the locker room at the half.

Brennan Canada scored 16 of his game-high 25 points in the second quarter to give the Cards the edge.

The intensity turned up in the second half as both teams became more aggressive and revealed how important the rivalry was.

Bourbon County head coach Lamont Campbell was ejected from the game in the third quarter as well as two Bourbon fans in the stands were ejected in the fourth.

Three different Colonel players were assessed with technical fouls which gave the Cards the upper-hand and GRC calmly quieted the crowd with a 52-39 lead after the third quarter.

The Cards held a firm grip on the lead into fourth quarter and allowed the bench to ride the wave until the clock hit zero.

“I thought our kids played hard,” he said. “It was great to have guys step up and make plays. We got some major foul trouble, but it was definitely an emotional game. We had different guys with different minutes step up and help control tempo. It was a great win for our basketball program.”

Cook said his team kept their poise in the second half to stay focused on the game and not feed into negative energy.

“We kept our composure for the most part,” he said. “We tried to take care of the basketball. It was a team job as far as talking to each other. In a game like this, the team who talks the most wins. Our guys did a good job of over-communicating to figure out the next play. When we do all those things right we are a good basketball team.”

The Cards will get a couple days to refresh their legs before returning home Saturday as they host 12-3 Johnson Central.

Cook said these next few days are crucial.

“We are going to watch film Wednesday,” he said. “We are going to try and rest our minds and legs a little bit. We are going to talk about a few things we did wrong. Johnson Central is a good team and is one of the best in the 15th Region. We definitely have our work cut out for us.”

The George Rogers Clark Lady Cardinals left Bourbon County with a 74-42 win over the Lady Colonels in a 40th... read more