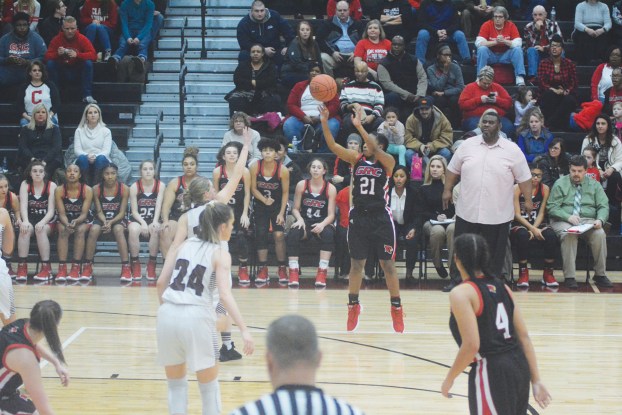 Shelbi Wilson shoots a three in the first half. (Photo by Micah Satterly)

The George Rogers Clark Lady Cardinals left Bourbon County with a 74-42 win over the Lady Colonels in a 40th District match up.

After both teams went scoreless in the first two minutes of the game, the Lady Cards caught fire.

Kennedy Igo went 6-7 from three-point range in the first half to seal a 19-9 lead after the first and stretched it to a 35-19 lead by halftime.

Igo finished with a game-high 29 points.

GRC kept the ball rolling through the third quarter as they outscored the Colonels 17-9 to extend their lead to 24.

The Lady Cards were able to coast through the fourth until the final buzzer.

Despite the win, head coach Robbie Graham felt his did not perform to their usual standard.

“We didn’t play our best basketball,” he said. “We had a lot of areas we were raggedy in on both sides of the floor. We missed a lot of easy shots and not sure what the reasoning is for. We left a lot of easy points out there from missing easy shots. We played harder in the second half and had a good run to finish the game.”

Graham said his team was able to end their early scoring drought by feeding off Bourbon’s turnovers.

The Lady Cards will head to Scott County Thursday for the first game of the Toyota Classic.

Graham understands his team will have their hands full against these powerhouses in the upcoming weekend.

“It is a heck of a week coming up for us,” he said. “They are three really, really good teams. Three teams that will have the chance to win their regions and one team probably favored to win state in Scott County. We are excited and are looking forward to the challenge. It is going to be tough and that’s what we want. Nobody is cutting any nets, but we are going to go out there and compete.”

Brady Denham has been playing basketball since he was seven years. He also plays quarterback in football and said it... read more