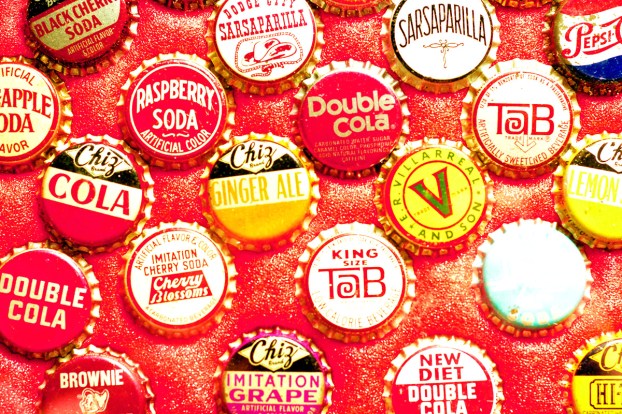 A large cased collection of vintage soda bottle caps is up for bid. (Photo by Lashana Harney)

Jack Clements has an eclectic collection, ranging from pocket knives, stamps, guns, soda pop caps, Civil War memorabilia and more, whereas Clifton Barnett could fill the walls of nearly any house with his clock collection.

The two Clark County collectors are parting with some beloved items in their collection this week in an online absolute two-day auction.

Clements, now 79, said he had always been a pack rat. If he saw something that caught his eye, he’d buy it. Later, he’d likely sell it.

“Anything I saw value in that nobody else wanted, I would buy it,” Clements said.

Over the years, Clements has bought and sold thousands of items in his collection. Clements recalls purchasing a variety of objects for $5 at an auction only to sell it later for $1,000.

Clements said one of his favorite items in his collections, which is part of the auction, is a statue of Jocko.

“George Washington had a stable boy,” Clements said. “They called him Jocko, as history tells it … I got it off the internet. It seems to be true. Anyway, whenever, George Washington wanted to go … he told Jocko he was too young, so stay here and hold the light so we can find our way across the river. But Jocko froze to death, still holding the light. [Washington] felt so bad, he created this statue of him.”

Clements said another favorite item includes a Winchester Model 1873, dubbed the “gun that won the west.”

Clements returned to his home state of Florida last month after living in Kentucky for more than 30 years. He was an ironworker, traveling the globe to build and picking up items for his collection along the way.

Clements took a large chunk of his collection with him but left about 350 items behind to sell in the online auction. Clements said he hopes buyers enjoy learning the history of what they buy and he hopes the sale is a success.

Barnett, on the other hand, wasn’t always a collector. Instead, his story tells of a man who had found a passion that kept him ticking.

There was a fella who moved next to Barnett’s office while he was stationed in Germany with the Airforce in the ‘50s.

“I don’t need no clocks,” Barnett would tell him.

But the young man was persistent, saying it was an offer Barnett couldn’t refuse. Soon enough, Barnett purchased the 25 clocks for $100. Some worked, some didn’t, but Barnett tinkered on each clock until he learned the ins and outs of what makes a clock tick and tock.

“I fell in love with the old clocks,” he said.

Shortly after that, Barnett, now 87, had 300 clocks. Though, at one point in time, he had accumulated over 500 clocks.

His wife, May, grew to love the clocks too. She was an enthusiast for novelty clocks, of which she collected about 100 or so. May also loved to collect teapots.

Barnett said when he moved back to the states, he sold clocks out west and then later in Florida before moving back to Kentucky in 1980. He had shipped 400 clocks from Germany to Cheyenne, Wyoming, when he first returned.

Barnett is fascinated by the history of the clocks. Timekeepers date back to the 14th Century, but the first pendulum clocks were invented a couple of centuries later.

Barnett said one the oldest clocks he had collected was nearly 300 years old and was roughly seven-feet tall.

Clocks covered many walls of Barnett’s house at 138 W. Lexington Ave.; grandfather clocks, some as tall as six-feet, watched the time dutifully from the corners of a room while other various novelty clocks cuckooed at the top of the hour.

But now, the tick-tocking brings a sound to the home’s silence as Barnett and his wife parted ways with their beloved 1930s-style home. The clocks are now waiting for their new home.

“There comes a time you have to give up some stuff,” Barnett said.

Barnett said he hopes his clocks go to a good home, and he hopes the buyer realizes every clock’s significance: each clock not only kept the time, but it kept him alive.

The effects of bullying can stay with a child throughout their adolescent years and into their adulthood. About 60 percent... read more