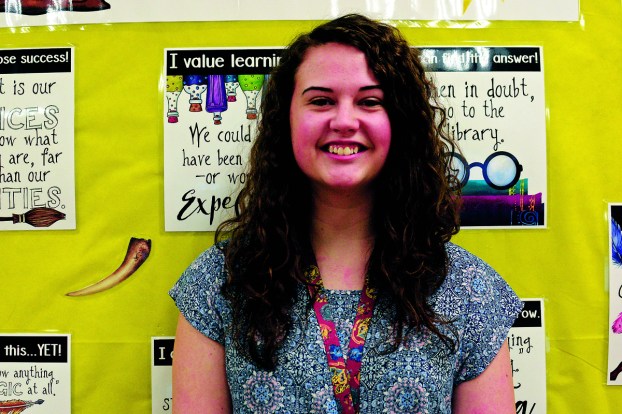 Math teacher encourages students to be themselves

Kayla Bush is who she is, and she’s not ashamed.

Bush, a math teacher at Campbell Junior High School, teaches her students to be themselves, and do so unapologetically. Bush doesn’t ever hide her true self from her students, tieing in her love for Harry Potter in the classroom and laughing with them as she clumsily trips on her own words.

“If you try to teach or act in a way that is not genuine to who you are, the kids are going to see right through it,” Bush said. “And so will your co-workers and it’ll just be a lot better for everyone if you are who you are. I feel like I’m never more myself and more honest with who I am than when I’m with my kids because that’s what they need. They need somebody who’s willing to be who they are.”

Bush completed her student teaching at Campbell and was offered a job there after graduation.

Bush has been teaching the advanced math courses at Campbell for three years.

“It’s a cool challenge to them and me,” Bush said. “So I get to ramp up the difficulty a little bit and move a little faster, go a little deeper into the content. So I enjoy teaching the group that I do.”

Bush said becoming a teacher is something she has always known she wanted to.

“When I was young I was teacher’s pet,” she said. “I always wanted to help and do things around the classroom.”

Bush started to doubt her career choice around middle school, though.

“I thought there has to be something else that I could do,” Bush said. “I don’t want to feel like I’m defaulting to being a teacher. So I tried to explore other interests and stuff but never could come up with anything.”

Bush’s mother tried to convince her to follow her footsteps by pursuing a career in nursing, but Bush never had that passion. Bush’s passion had always been teaching.

“So probably about junior year of high school, I said OK, now I’m serious about this. So I took my senior year elective and was a teacher’s aide in a math class. And I loved it. I loved going in and helping those kids with their math. And I even got to teach a couple of lessons. And it was a cool experience and made me sure of what I wanted to do.”

Teaching is much better than she imagined it to be, though.

“I have such a better time now than I ever thought I could,” Bush said. “I’m surrounded with amazing co-workers that I get along with, that I genuinely enjoy seeing every day. My kids are fantastic. And we have really good lessons. And it makes me so proud to see the kind of things that they come up with, and how they connect topics. It’s a great school to work for. They give you so much freedom and trust. And you feel like the administration here has your back.”

And although it sounds cliché, spending time with her students ranks the highest among Bush’s favorite parts of the job.

“The things that I remember is the funny story that a kid told me or whenever one kid said the wrong answer, but then it turned into a big joke, and the whole class is getting along and laughing,” Bush said. “And it’s just really a cool experience to share every day with these kids.”

At the end of every year, one of the last activities Bush puts together is asking her students for constructive criticism. Bush said the students in her first year gave her feedback that has stayed with her.

“It’s always the kid you never expect, but the feedback that he gave me was that I taught him why it was important to be kind to others,” Bush said. “He told me that he learned in my class why you should always be kind to people because you never realize what they might have been going through at home or what they might be dealing with in class or out of class.

“So just hearing that validation that I taught him such an important lesson, I think about that all the time. I think about how I can continue doing that for each new group of students.”

Bush said she tried to explain why math is essential to learn even if a student doesn’t want to be an engineer, mathematician, etc.

“I do hear a lot of that: when am I ever going to use this in my life?” Bush said. “But math is one of those things you don’t learn it so that you can do algebraic expressions and equations later in your life. It’s all about reasoning. It’s all about looking at a problem and being able to sort it out in multiple ways. And we do harder and harder problems so that your brain learns to problem solve in harder and harder situations. So I try to relate it that way.”

And when a problem — or anything in life — gets tough, don’t quit and stay true to yourself.