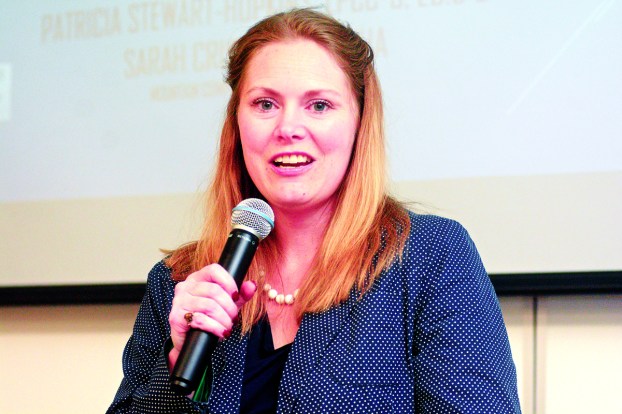 The effects of bullying can stay with a child throughout their adolescent years and into their adulthood.

About 60 percent of adults who were victims of bullying as a child reported they still think about it.

The final installment of “Dangers in Plain Sight” focused on bullying and school violence, with a goal of uniting the community to help stop the dangers that stem from bullying.

Clark County Agency for Substance Abuse Policy (ASAP) and BCTC partnered together to present “Dangers in Plain Sight,” a three-part community education awareness series for K-12 parents and guardians in an effort to educate and bring awareness to the crucial issues of drugs, social media, and bullying and school   violence that affect youth and community. Ramsey Flynn also helped to coordinate the events.

Melissa Stocker, the ASAP board coordinator, told The Sun the series received two grants from the Greater Clark Foundation and the Clark County Community Foundation as well as numerous donations and sponsors to help make the series possible.

Flynn told The Sun they plan to continue the series next year. For people who missed the sessions, the presentations are available on Channel 5 or DVD.

Patricia Stewart-Hopkins, a clinic coordinator at Mountain Comprehensive Care, gave the presentation Monday. Stewart-Hopkins told the crowd bystanders who intervene help to stop the bullying about 57 percent of the time.

“You, being present and informed because of your presence here tonight, could reduce bullying by over 50 percent, and that’s why you’re here,” Stewart-Hopkins told the crowd.

John Lennon, the youth services coordinator at George Rogers Clark High School, also spoke at the session Monday. Lennon said he wanted to remind folks about the services the various Family Resource Service centers offer in Clark County. Pastor Marvin King also opened the floor for dialogue after the session to ask the community what they can do to work together to reduce bullying and school violence.

The American Psychological Association says bullying is a form of aggressive behavior in which someone intentionally and repeatedly causes someone else harm.

“We have a variety of definitions of what bullying is,” Stewart-Hopkins said. “They have some commonalities so that unwanted aggressive pieces are common among those definitions, as well as the person who is the bully in the situation has some real or perceived power over others that are involved, and it’s a repeated behavior over time.”

Stewart-Hopkins said some parents, teachers, community members, etc. might be unsure whether what they see is bullying. However, she said some clear differences can help a person determine whether a situation is bullying or if it’s a conflict between friends. In a conflict, both sides can share their opinion freely, and no power imbalance is in play. Generally, in a conflict, people can stop and change their behavior when they recognize they are hurting someone else.

In opposition to that, bullying usually involves an intention to harm. There’s a power differential, and even with the knowledge that they are hurting someone, the behavior continues.

“Social bullying is often tied into verbal bullying,” Stewart-Hopkins said. “It’s when we use bullying to jeopardize someone’s reputation or relationship. This comes into play at a very early age.”

Some forms of social bullying include leaving someone out on purpose, spreading rumors and embarrassing someone intentionally in public.

“Those cliques that we have in school, those are normal, right?” Stewart-Hopkins said. “It becomes a problem when there’s intention around the exclusion of others. And it’s done in a hurtful manner, to cause humiliation and embarrassment from out casting someone.”

Physical bullying is one of the easiest forms to identify, Stewart-Hopkins said. It can include fighting, tripping, pushing or even breaking another person’s items.

“You might hear about, well, I brought this to show and tell, and then so-and-so broke it, and he always breaks my things,” Stewart-Hopkins said. “That’s a red flag.”

Cyberbullying includes any type of bullying over digital services such as cellphones, tablets, computers, etc.

“It’s usually a form of social media where this kind of bullying occurs,” Stewart-Hopkins said.

Many children are taught to have “thick skin,” or the ever-popular “sticks and stone may break my bones, but words will never harm me.” While these words may ring true for some adults, it’s especially harmful to instill in children, Stewart-Hopkins said.

“Those kinds of misnomers don’t help to solve problems when it comes to bullying and school violence,” she said.

Stewart-Hopkins said one in 10 students dropped out of high school because of a bullying incident that went unaddressed or ineffectively addressed.

“And if you look at other research, it tells you that when you have one … high school dropout in your community, it costs the community and the long term a lot of money and financial resources, etc.,” Stewart-Hopkins said.

Research also shows many boys who were bullies in middle school had at least one criminal conviction by the age of 24, and 40 percent had three or more convictions by the age of 24. Bullies are also four times more likely than their peers to have multiple convictions. Bullying also leads to mental and physical health issues as well as other high-risk behaviors for both the victim and the bully. It can also lead to suicide.