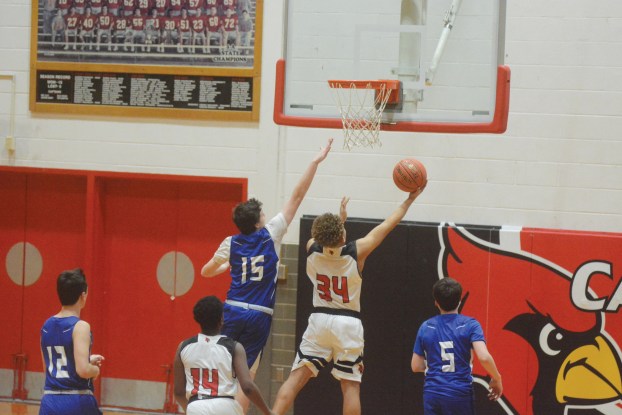 Kareem Guerrant drives through the lane and makes a lay up. (Photo by Micah Satterly)

Campbell shuts down LCA for win on eighth-grade night

The eighth graders ended on a high note as they dropped the Eagles 44-34.

The Cards lit a fire in the second quarter and held LCA to only one point in the quarter as RDC led 25-12 heading into the locker room at halftime.

RDC had six different players with a made field goal in the first half.

The Cards continued to pound the Eagles throughout the second half with a 38-19 lead after the third quarter.

Jaden Nein started to heat up as he drained two threes in the last minute of the third.

Head coach Dwain Gay was proud of his team’s performance.

“I thought we played excellent,” he said. “I thought we gained some energy from the crowd tonight. The pressure we put on them caused a lot of turnovers and caused their guards be disrupted.”

Gay said it has been a privilege to watch his eighth graders develop into young men and athletes.

“It has been a great honor to coach these kids,” he said. “They’ve been really receptive to the coaching and the direction we’ve been giving them. The improvement has been tremendous as the season went along. We had a few bumps in the road at the beginning, but we fought through it and kids bought in. The kids believed in us and we believed in them and we have made some great accomplishments at the end.”

RDC has one regular season game against Sayre Monday before preparing for the Bluegrass Middle School Conference Tournament.

Gay said these next two weeks are crucial and plans to take advantage of the breaks between games.

“After that game, we will have a little down time,” he said. “We will have a few days off. We will have plenty of time to go over things and get ready to make that tournament run. We will get our legs back under us and prepare for that run.”

Coleman Collins has been playing most since he was five years old. Collins played soccer until he realized he had... read more