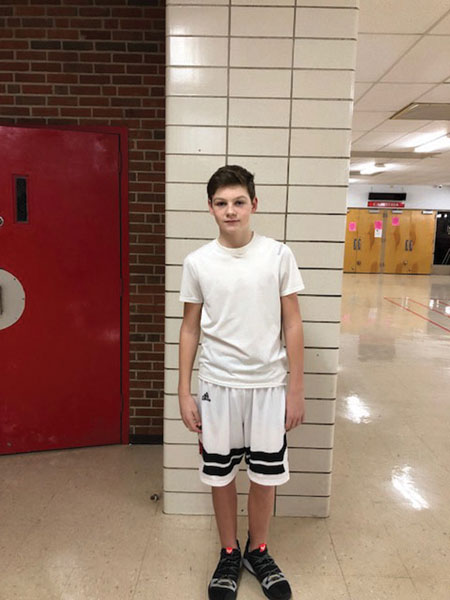 Jacob Smith used to play baseball and football alongside basketball and plans to start playing football again next year. (Photo by Micah Satterly)

Robert D. Campbell Jr. High seventh grader Jacob Smith has been hooping since he was five.

Smith used to play football and baseball, but thinks he will pick up football back up again next season.

“I kind of just got tired of playing baseball,” he said. “All I wanted to do was play basketball this summer so I quit playing football.”

Smith said his strengths are his offensive skills.

He plans to work more on self-esteem.

“I can dribble and pass pretty well,” he said. “I want to gain more confidence and driving to the basket more.”

Smith said his motivation comes from his parents.

“My mom and dad push me,” he said. “They push me in sports, the classroom and every other way they can.”

Smith wears no. 30 because it was the number given to him.

Smith said he looks up to NBA legend Pete Maravich.

“I’ve watched movies about him,” he said. “He was just a great all-around player. He’s definitely one of my idols.”

Anton Ffiske finds other ways to help his team

Anton Ffiske is an eighth grader at Robert D. Campbell Jr. High and has been playing basketball since he was... read more