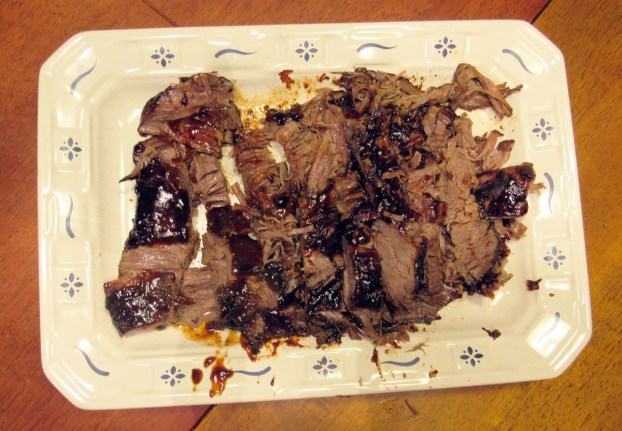 Nailed It or Failed It: Baked barbecue brisket

When I decided to try this recipe, I was in the mood for beef and wanted something simple to prepare.

In a small bowl, whisk together celery salt, garlic powder, and onion salt. Season both sides of the brisket. Place meat in a foil lined baking pan that is enough to fully enclose the meat. Pour liquid smoke and Worcestershire Sauce over the meat and as it drips to the side, lift meat up so the liquid also seasons under the meat.

Crimp the foil tightly over the meat. Return to the refrigerator and marinate overnight.

Bring the meat to room temperature (30 minutes) and bake at 275 degrees for 5 hours. Remove foil and pour about 1 cup of barbecue sauce over the meat. Bake for an additional 60 minutes with the foil open.

Cook and slice into thin pieces.

I reviewed the recipe and figured I had everything in the cabinet I would need, then I headed to the freezer to look for a beef brisket.

After sifting through the beef section, I didn’t find a brisket but I did find a flank steak. I figured the two were interchangeable.

I let the beef thaw, and before going to bed, I started gathering the other ingredients to get things going.

I lined a small baking dish with two layers of foil and placed the meat in the pan.

You might want to note that the flank steak I had was only half the size called for in the recipe. I used the full amount of spices this recipe called for.

I closed up the foil and put the pan in the refrigerator.

The next day since I was heading to work, I left the instructions for preparing this dish on the counter and asked Brad to get it in the oven.

After letting the meat sit at room temperature for about 30 minutes, Brad put the meat in the oven to slow cook.

When I got home from work, I could smell the meat when I walked through the door. Brad let me know we hadn’t really timed the meat quite right and it would be about an hour before it would be ready; he’d just poured the barbecue sauce over the meat and it was continuing to cook.

That was just fine with me because it gave me time to change my clothes and prepare a couple of side dishes for our evening meal.

When the timer sounded, I removed the meat from the oven and when I looked at the barbecue covered meat, I thought it looked burnt.

I placed the meat on a small platter and started to cut it. It would not slice like I thought it would and I didn’t end up with pretty little slices. I did get a few slices out of it but mostly it kind of fell apart.

I thought the flavor of the meat was pretty good and Brad agreed, but I’m not sure it was anything to write home about.

The meat was fairly tender, but not melt in your mouth tender.

We continued eating and after our bellies were full, we talked a little about this recipe.

We agreed that even though it had a decent flavor, it probably wasn’t something I’d (we’d) make again.

I don’t know if it was the cut of meat or not; maybe a brisket and a flank steak aren’t interchangeable (maybe I should have looked it up on the internet).

I don’t know, but in the end, I’d say it’s a toss-up, I feel like the meal was successful, but I doubt it will be added to my self-made cookbook.