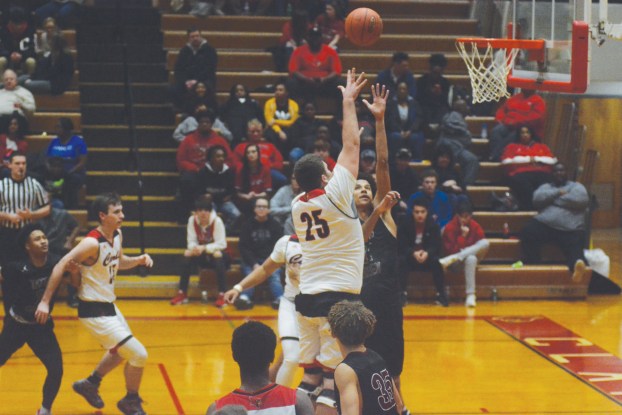 Ben Jackson shoots a floater in the second half of GRC’s 73-54 win over Tates Creek Tuesday. GRC improves to 16-6 on the season. (Photo by Micah Satterly)

The Cards have now won three straight and improve to 15-6 on the season.

Both teams traded baskets in the first quarter and were off to a sluggish start.

Jehdon Jenkins and Jordan Graham scored a combined 15 of GRC’s 21 points in the first as GRC led 21-19.

GRC quickly found momentum in the second quarter as their half court trap defense flooded the Commodores and forced turnovers.

The Cards held Creek to five second quarter points as GRC stretched the led 37-24 heading into the locker room at halftime.

The Cards continued to pound on the Commodores throughout the third, outscoring Creek 20-6 heading into the fourth.

GRC kept their foot on the gas and never let up to seal the win.

“I thought we had a really good second and third quarter,” he said. “Our defense really picked up. We handled their pressure really solid. We attacked and got some easy shots. I think we’re getting better. Are we a complete package yet? No, but in three weeks we might be there.”

A sluggish first quarter has been GRC’s story this season, but Cook said his team is becoming smarter with experience through adversity.

“Sometimes we go out and play great,” he said. “We’re just trying to play by the flow of the game. Tonight we scored some points and so did they. We were able to make some changes defensively and I think we are becoming a smarter basketball team. For us, we’ll play the game and if we are able to step it up in the second or third quarter then it’s a good thing.”

GRC will head on the road Friday to face Montgomery County for the second time in two weeks.

Cook said the win against Tates Creek will help carry momentum as his team is searching to go 5-0 in district and a regular-season sweep against Montgomery.

“For us, we are hoping it will be our fifth district game,” he said. “We want to get prepared for that and it’s an important game for us. Hopefully we go in Friday and play well. I know it will be a fun game and energetic game. We see it as a big time district game and hopefully lock up the number one seed.”

Lincoln Bush pitched in 14 points and Jerone Morton and Brennan Canada put up 11 points a piece.

Girls will tipoff at 6 p.m. and 7:30 p.m for the boys Friday at Montgomery County.

Cooper Wasson works towards getting handles like Kyrie Irving

Cooper Wasson is a seventh grader at Robert D. Campbell Jr. High since he was in first grade. Wasson also... read more