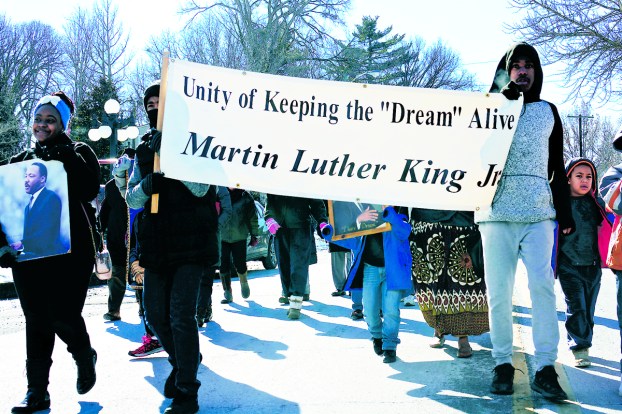 The Winchester-Clark County Unity Committee, which organizes the event, wanted to spread King’s message: “If I cannot do great things, I can do small things in a great way.”

Its purpose was to ensure the community came together each year to recognize and commemorate King’s life and his message. It has done so ever since with an annual march and celebration.

The 33rd celebration of MLK’s birthday in Winchester began with a breakfast and music accompaniment by the George Rogers Clark High School jazz band Monday at the St. Joseph Fellowship Hall.

Feature speaker Ambyr Graves Blair, a native to Winchester, talked about how she aims to make a positive impact every day. Blair said the impact someone makes could have a ripple effect on others.

Mayor Ed Burtner presented the Humanitarian Award to Sandy Stults, museum director at the Bluegrass Heritage Museum, for her many years of service to the community.

Burtner said he was pleased to see the number of young people participating in the program.

After the program, some attendees marched to the courthouse from the fellowship hall, holding signs and portraits of King.

Burtner also thanked the committee for continuing to honor King with the annual march and program.

“A voice like Dr. King was important during that period of time because he raised issues and challenges and questions,” Burtner said.

After opening its odd-year short session at the start of January, the Kentucky General Assembly is now on a three-week... read more