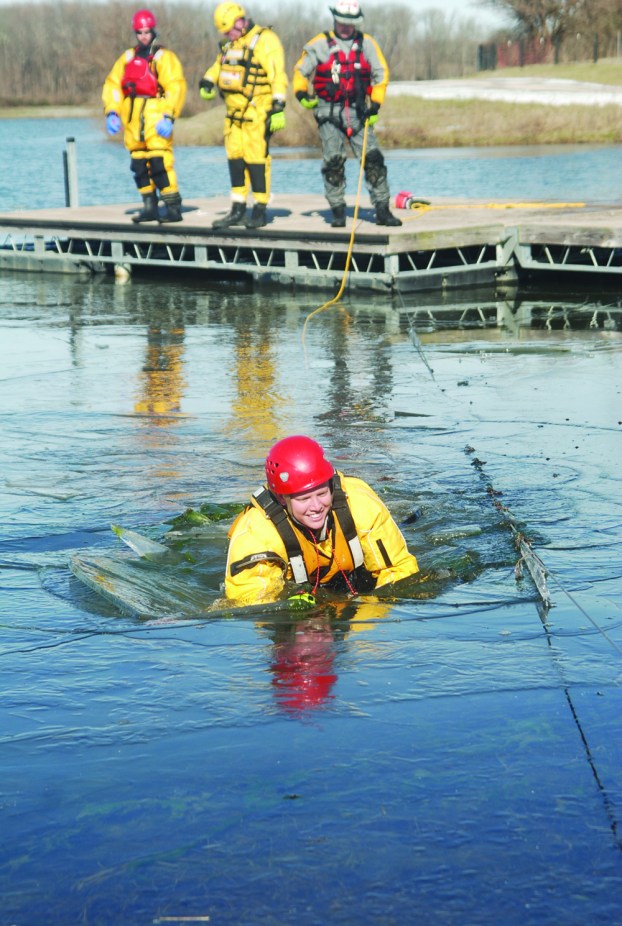 Firefighters use cold temps to train for ice rescues

As temperatures crept above freezing for the first time in days, about two dozen firefighters were hanging on to every scrap of ice they could.

For the third straight year, Clark County Fire Department hosted an ice rescue class to train firefighters how to respond to emergencies on frozen bodies of water.

This year’s class attracted firefighters from Clark County, Lexington, Richmond, Powell County and Estill County. Given warming temperatures Tuesday, firefighters jumped straight into the water above the reservoir off Water Works Road, rather than spend the first day in the classroom.

Firefighters practices a number of scenarios, including rescuing themselves and rescuing others, whether going on the ice themselves or in an inflatable boat.

By noon, most of the ice was already broken up after many of the firefighters went in the water themselves and pulled themselves, breaking the ice as they went.

Technical rescue skills has been a growing need for fire departments as they work to diversify and prepare to respond to any kind of call.

Clark County firefighter Lon Gordon, a certified instructor in the department, said they have already responded to three special rescues in 2019. Two of those were large animal rescues.

“On a normal fire department, that would have been two hours or better,” Gordon said. “We got on scene and it was 30 minutes and we’re done … because of our training.”

Wright said the department has been working for four years to train its firefighters to become instructors and host these classes for departments in surrounding counties. The department also hosts water and rope rescue courses annually, which also attract about two dozen firefighters regularly, he said.

Clark County Community Services is looking for help and donors to refill its “You Can Help” funds to help a... read more