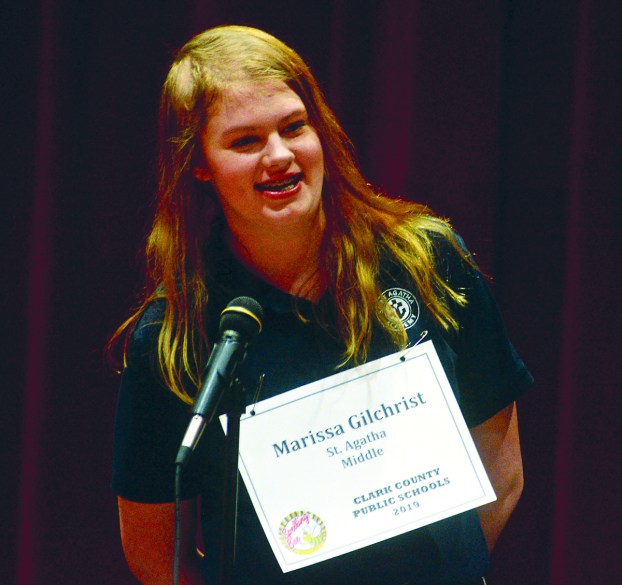 Third time’s a charm for Marissa Gilchrist as she successfully defended her champion title Wednesday at the Clark County Spelling Bee.

As an eighth-grader at St. Agatha Academy, it was Gilchrist’s last year to participate in the spelling bee. The spelling bee lasted about six rounds and ended when Gilchrist spelled “hyperbole” correctly while her opponent missed the following word.

Gilchrist was one of among nearly 20 Clark County students, from the fourth through eighth grades, who participated in this year’s spelling bee.

Each of the county schools, as well as St. Agatha and Calvary Christian schools, sent representatives for a chance to represent Clark County at the state spelling bee in Louisville in March.

Students were allowed to ask for a definition, the language of origin and for the word to be used in a sentence.

Gilchrist said she was a bit nervous spelling “vichyssoise,” as she had struggled with the word, which is the term for a creamy French soup, during practices at home.

“It was one I struggled with every single time,” Gilchrist said. “Then I got it and spelled it right which I’m excited about.”

George Landon, of Calvary Christian Middle, was first runner-up and will be an alternate for the state competition. Cole Ledford, of Baker Intermediate School, came in third place.

Gilchrist will compete at the Ford Motor Company Spelling Bee on March 16. The top five spellers receive savings bonds from the Kentucky Derby Festival Foundation, while the overall champion gets to ride on the Winner’s Float in the Republic Bank Pegasus Parade.

“I’m proud of myself,” Gilchrist said.

Couch to serve year for assault

A Winchester man will serve a year in jail after severely assaulting his girlfriend in December. Joshua Couch, 36, of... read more