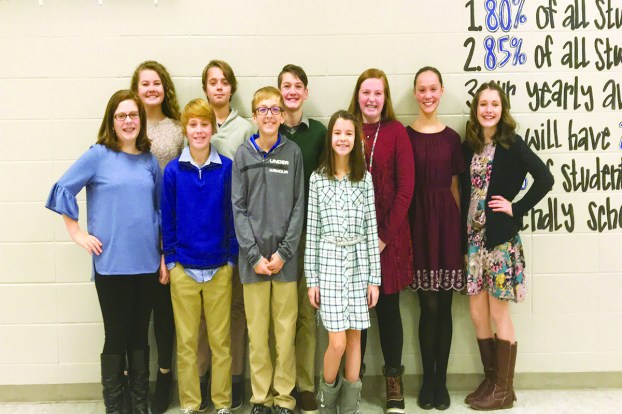 The Amazing Shake is a national competition that tests students on their professional, discipline and skills such as interviewing, respect, eye contact and a proper handshake.

In a round of the competition dubbed “The Gauntlet,” students take part in 20 stations designed to catch students off guard. Judges gave students an unexpected prompt that requires them to be able to think on their feet and then scored students on their performance. Students presented speeches in front of members of the community, read articles from a newspaper, sold products, held conversations while being distracted, advised inmates and more.

“It’s all sorts of twists and turns you would never expect,” Zeysing said.

Every student was given a study guide with potential topics to discuss weeks before the competition, but other than that, the students went into every station unsure of what to expect.

“Most of it was thinking on your feet,” Wilson said.

Zeysing said her favorite station was one during which a clown popped out at her which could explain the screams she had heard throughout the room earlier.

Wilson had the highest overall score.

Wilson said the win came as a shock.

“It was pretty crazy, to say the least,” she said.

Wilson said one of her favorite stations was one during which she had to maintain a conversation while also trying to plant a seed. She said she also enjoyed debating; Wilson and Zeysing went up against each other to debate school uniforms.

Leah Adams, a seventh-grade social studies teacher at RDC, previously told The Sun about 130 students are involved in the new program. Adams and a few other teachers discovered the program in August at a training conference in Mason County and decided to bring the program to Campbell.

Part of the program also centers around teaching students their civic duty and connecting them to their community through service leadership projects.

Veteran Hospital. Students separated into groups and called businesses to set up a box for hygienic donations that they would later donate to the hospital.

For six weeks, students collected donations and gave them to veterans. Students also created questions and conducted interviews with veterans from the community as part of Campbell’s Veteran’s Day program.

From those two projects, Adams and other teachers chose 10 students to compete at Mason County Middle School.

Zeysing, Wilson and Brock will attend the national competition in February at Ron Clark Academy in Atlanta. The Clark County Board of Education recently approved $4,000 in funding for the students to make the trip.

Zeysing and Wilson said they owe their success and gratitude to Superintendent Paul Christy, their program leaders, Adams and Amber Murphy, and the staff at Mason County.

Zeysing said she’s been watching videos of the past competitions to prepare for nationals.

In a letter to the board, Wilson said she thinks it is important to learn different social skills for future jobs and events.

“By involving ourselves in different, unexpected scenarios, we can grow to be successful adults in the future,” she wrote. “After taking part in many events, I have already grown as a student and as a person in my daily life. This competition is one of the best ways to continue learning about different skills and abilities to help me.”

Wilson said the program has also helped to prepare her for the unexpected.

“I feel like it does help prepare you for the situations that you may be in that you don’t ever expect to happen,” she said.

Zeysing and Wilson agreed the program has helped them to be more confident in themselves.

Wilson said while students may not currently be the highest percentage of the population in the community, the students are 100 percent of the community’s future.

And the Amazing Shake program is one way to help ensure the future is bright.

Third time’s a charm for Marissa Gilchrist as she successfully defended her champion title Wednesday at the Clark County Spelling... read more