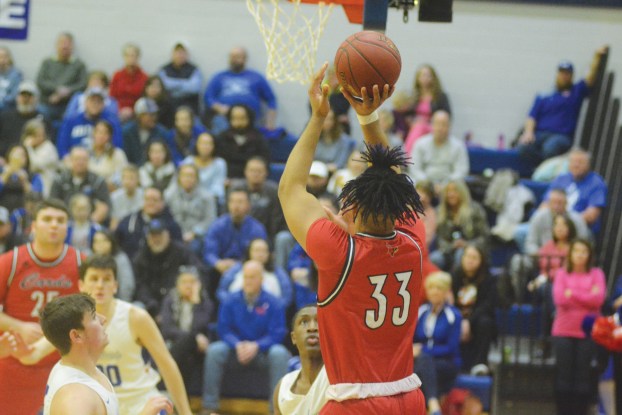 Jehdon Jenkins drains a jump shot in the first half of GRC’s 67-55 win. (Photo by Micah Satterly)

The Cards came out red hot as a quick and early five points for Jehdon Jenkins and three-pointers from Brennan Canada and Jared Wellman pushed them out 11-2 to force Montgomery to call a timeout two minutes into the game.

The Indians slowly started to dig themselves out of the hole after getting some shots to fall through the net but still trailed 28-18 at the half.

GRC gained the momentum again and managed to pull away 50-31 and seemed as if the game was out of reach.

Montgomery had different plans in the fourth quarter as they were able to quietly capitalize off GRC’s turnovers and drilled six threes to help cut the deficit to only 60-51.

The hole the Indians dug themselves into early in the game was too deep to be climbed out of as the Cards held them off.

Head coach Josh Cook said the early lead helped them maintain momentum throughout the rest of the game.

“We played pretty good,” he said. “We got off to a great start. I think we played with some poise down the stretch. Montgomery made some shots and that’s the hard part about it. You’re going to run into nights like that. It was a great experience for us and something to keep building off of.”

Cook said his team is clicking at the right part of the season.

“Our practices and scouting have been getting better,” he said. “Our guys are making good decisions and our game plans are good. We have to keep working on communication, but our minds are in the right place. We’re playing good basketball, and this time of year, that’s what we want to do.”

The Cards will host Bourbon County Tuesday to close out their last district meeting.