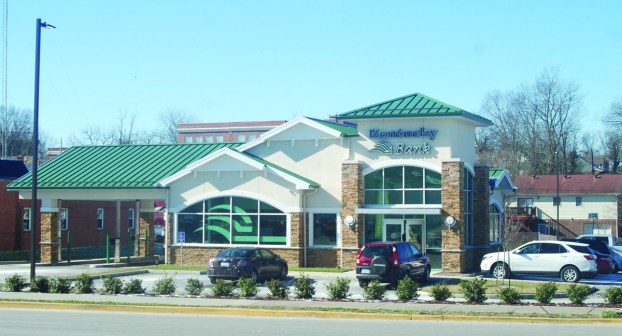 Kentucky Bank opened its new Maple Street branch Friday after receiving its final approval earlier this week. The bank is similar in design to the Colby Road branch. (Photo by Fred Petke)

The bank closed its former office at the corner of Lexington Avenue and Maple Street in spring 2018 in anticipation of moving into its new office at Maple and Washington streets late last year. Questions about the potential historical significance of the site and the shutdown of the federal government, though, meant the final approval came only this week.

The new branch is similar to Kentucky Bank’s location on Colby Road with its open concept, but is smaller in scale.

Kentucky Bank President and CEO Louis Prichard said banks are building smaller branches, partially in response to increasing and improving technology, from automated teller machines to online banking. There is still a desire from customers to have a physical bank at times, he said.

“People are using technology more and more,” he said. “People want the physical location for an event: opening an account (or) closing a mortgage.”

Kentucky Bank has been without that physical location in downtown since it moved out of its previous location in May.

One delay surfaced when construction was nearly complete about a request for a historical survey of the site, which previously housed Tyler Banks American Legion Post 204. and another building. The survey had not been completed when the bank did its research and it was not listed on any historical registers.

A memorandum of agreement called for the bank to erect a sign in Heritage Park about the history of the Poynterville Community and to publish an illustrated booklet about the African American communities in Winchester.

The final sticking point was approval by the federal Advisory Council on Historical Preservation, which is part of the Department of the Interior, Prichard said. The department was deemed non-essential and was part of the federal government shutdown, which delayed its approval of the project.

“(The shutdown) added to the delay but was not the cause of it,” Braden said.

The final approval from the FDIC came this week and the branch opened Friday. Regular hours will be 8 a.m. to 4 p.m. Monday through Thursday and 8 a.m. to 5 p.m. Friday.

Megan Huff made her 16th birthday as sweet as can be. Instead of gifts, Huff asked party-goers to bring diapers,... read more