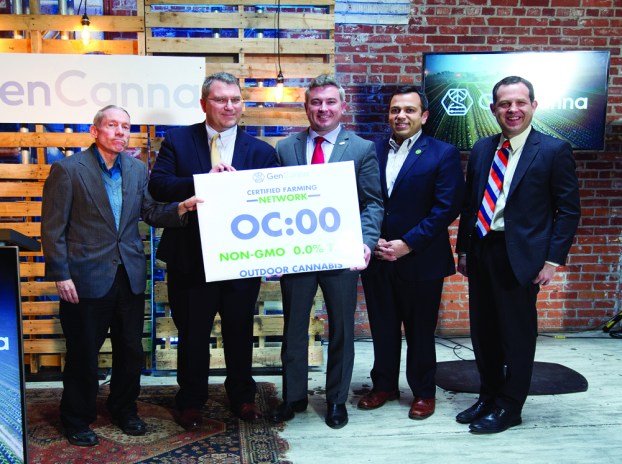 THC, or tetrahydrocannabinol, is the substance in marijuana which produces the “high.”

Industrial hemp naturally has low levels of THC, but not enough to produce the “high” reaction.

GenCanna is an agriculture technology company specializing in the production of hemp rich in CBD.

The company was an inaugural member of the Kentucky Department of Agriculture’s Industrial Hemp pilot program and was the first hemp pilot program participant explicitly dedicated and exclusively to researching and commercializing hemp-derived CBD in the state, according to a news release.

“We’ve been talking, trying to legalize hemp for the past six or seven years,” Miller said. “There’s a difference between hemp and marijuana, and whatever your opinion is of the latter … the two plants are different,” Miller said. “And by going to this level, by being able to bring something at 0.0 percent THC genetics, you are now being able to draw clear margins between the two.”

Bevan said the development was made possible because of its partnership with the University of Kentucky College of Agriculture, Food and Environment as well as the Kentucky Department of Agriculture.

Chris Stubbs, GenCanna’s chief science officer, said the company is excited and humbled by its partnerships in research and development that lead to meaningful commercial impact.

“Partnerships like this empower farmers, processors and consumers,” Stubbs said. “These types of opportunities substantiate the economic impact that the re-ignition of the hemp industry has at a local, state, domestic and international level.”

Stubbs said continued research and development efforts would be crucial in unlocking the potential of the knowledge Kentucky lost due to the previous prohibition of hemp. Combining innovative techniques in molecular biology, agronomics, quantitative analysis and advanced processing opportunities will prove to bring the hemp industry’s efforts full circle, according to the news release.

The announcement creates an opportunity for Outdoor Cannabis Genetics to debut through GenCanna’s Certified Farming Network. Farmers in the network will be the first to have access to Outdoor Cannabis (OC) genetics.

The industry’s economic growth has been driven by CBD production, which makes the announcement meaningful for those interested in entering the space, Bevan said.

“The growth of our industry necessitates innovations that scale,” he said. “Our OC: 00 TM genetics are virtually free of THC and will give both industry participants and industry onlookers confidence-in-compliance as they work to deliver new solutions from the hemp plant.”

Quarles said Kentucky strives on innovation when it comes to agriculture.

“Hemp is a crop that connects Kentucky’s past to our future,” hes said. “And Kentucky is its natural home.”

He said GenCanna’s announcement is a remarkable development for the hemp industry and Kentucky.

“When I became agriculture commissioner, I promised to make Kentucky the epicenter of hemp research and production in the United States,” Quarles said. “Announcements like these prove Kentucky is well-positioned to lead the nation in this arena. I congratulate GenCanna on their success, and I look forward to watching them continue to grow and invest in our state and our people.”

Quarles said industrial hemp is no longer a novelty, but instead it is on its way to commercialization. Other states are looking toward Kentucky in regards to the future of industrial hemp.

Quarles said he is proud of GenCanna, along with the collaboration of UK, for its announcement of genetic material of 0.0 percent THC.

GenCanna also announced it would sponsor masters and Ph.D. fellowships at the University of Kentucky. Students will focus on genetic improvement of hemp for enhanced CBD levels, metabolic engineering to increase production of minor cannabinoids, remote cannabinoid analysis and variety development and characterization for certified seed production.

Derrick Davis, whose family farms in Harrodsburg, has been selected as the master’s candidate focusing on variety development and characterization for certified seed production. Jia Tan, from Minnesota, has been chosen as the Ph.D. candidate focused on genetic improvement of hemp for enhanced cannabinoid levels, according to the news release.

In the last few months, GenCanna has announced significant expansion plans including the build out of a $40 million facility in Graves County that will bring more than 80 new jobs to the region. The company has also announced it will be aligning cultivation operations with its strongest farming competitor and partner at the Hemp Research Campus, Atalo Holdings. GenCanna and Atalo will each have access to 10,000 acres of farmland for the 2019 cultivation season.

Matty Mangone-Miranda, GenCanna’s CEO, said as GenCanna enters its sixth growing season in Kentucky, he has never been more confident that Kentucky is the right place to build the world’s leading hemp company.

“Independence is an essential ingredient of Kentucky’s character,” Mangone-Miranda said. “This is part of what makes Kentucky the optimal training ground to hone the entrepreneurial acumen that lives within all of us at GenCanna.”

Mangone-Miranda said he is thankful for great partners such as UK and other political leaders who have helped GenCanna as well as Kentucky’s hemp industry to thrive.

“Leader (Mitch McConnell), Congressman (James Comer) and Commissioner (Ryan Quarles) serve as the gold standard of public service. Their leadership has been essential to our success. We are confident that we are going to make Kentucky the ‘Silicon Valley of Hemp’ and the first, and best state to deliver on the tremendous potential value of the hemp plant.”