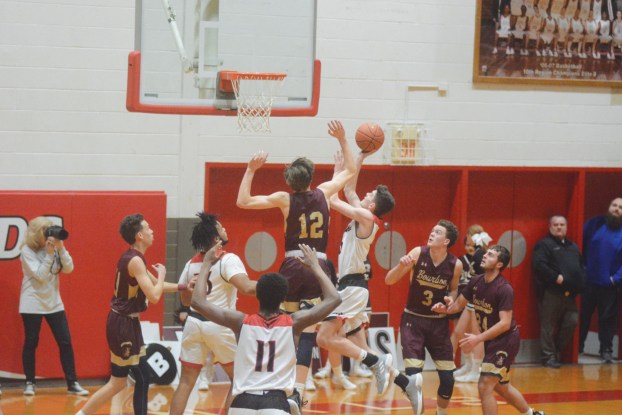 Jared Wellman goes in for a layup in the Cardinals’ 65-64 victory over Bourbon. (Photo by Micah Satterly)

GRC gets a scare, comes up big down the stretch

The George Rogers Clark Cardinals got all they could handle Tuesday against the Bourbon County Colonels as the Cards snuck away with a 65-64 victory.

The tempo picked up in the second quarter and both offenses finally got going, but neither team could get a stop defensively.

The Cards led 30-25 at the half as the Colonels drained a three at the buzzer before going into the locker room.

Bourbon pulled the game to within a possession multiple times during the third quarter, but couldn’t overcome the hump to take the lead and the Cards led 47-38 going into the fourth quarter.

A roller coaster of emotions flared up in the fourth quarter.

GRC broke the press and Jordan Graham had what seemed like an easy layup was hammered at the rim and the crowd went berserk as a huddle of players was standing over top of him.

K.J. Rucker was given a technical foul during the turmoil.

Jordan Graham made both free throws to extend the lead back to 63-60.

Bourbon only connected on one free throw and still trailed 63-61 with 20 seconds left in the game.

The Colonels were rewarded with the ball from the technical foul and got a clean shot off behind the arc to try and steal the game, but the ball rimmed out.

GRC free throws on the other end sealed the game away.

Bourbon out a three in the net at the buzzer, but the deficit was too large as the Cards ran away 65-64.

“We played alright,” he said. “We could do a lot of things better. Overall, we did good. We fought back into it and maintained the lead.”

Tempers sparked up in both meetings between Bourbon and GRC and Canada said the distinct rivalry gets both teams amped up.

“It’s more of a rivalry now,” he said. “Everyone is pumped to play this game. Momentum and everything changes in games like this compared to other games.”

GRC now has a five-game winning streak and Canada said the team has been playing more together now than they have all season.

“We’ve been playing for each other and as a team,” he said. “We’ve been doing whatever it takes to get the win. We e been giving it all every game.”

The Cards will head to Mason County to face the Royals Friday and Canada said his team will quickly shift their focus to the game later this week.

“It’s always a big game playing Mason County,” he said. “Especially when we go to their place because that’s where region is played. We’re going to go in there with the same mindset and do whatever it takes to win. We’ll be watching film and scouting, but hopefully we’ll go there and get a nice win.”