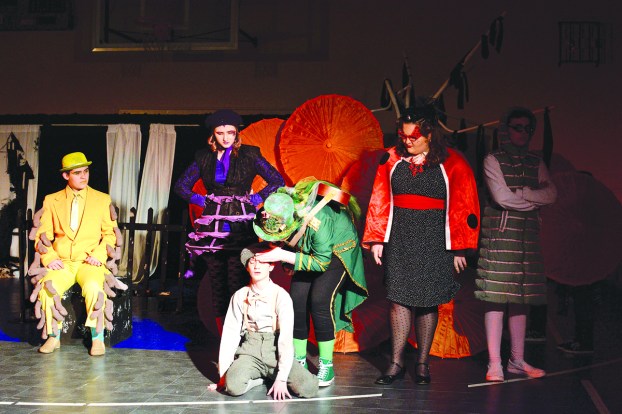 The cast of the Winchester Players' production of "James and the Giant Peach" act out a scene during a rehearsal Tuesday. (Photo by Lashana Harney)

Come right up close, and the cast of “James and the Giant Peach” will show its audience something wonderful.

Director Kelly Estes said families could enjoy Roald Dahl’s classic adventure, “James and the Giant Peach,” in a vibrant adaptation presented by the Winchester Players this weekend. The 18-member cast performs at 7:30 p.m. Saturday and 2:30 p.m. Sunday at the Clark County Preschool, 30 Beckner St. Tickets are available at the door; the cost is $10 for adults and $6 for children under age 13.

Estes said the story comes to life when two abusive aunts send James, portrayed by 12-year-old Zach Ross, to chop down an old fruit tree and he finds a magic potion, marking the start of an epic journey. James ends up in the center of a gigantic peach, inhabited by human-sized insects with equally oversized personalities.

“They take a journey across the Atlantic Ocean and end up in America,” Estes said.

The play, adapted by Richard George, is part of the Winchester Players’ annual touring show. The cast will perform in elementary schools beginning Friday and into next week. The cast will also travel to Georgetown to perform.

Cast members are also planning to read to preschoolers in costume.

Estes said she hopes the community comes out to support the show.

The cast auditioned in early December, so the turnaround has been quite the challenge, Estes said.

Andrew Roberts, 15, plays Earthworm; he said he thinks the audience may relate to some of the characters in the show.

“I feel like there would be certain audience members who could see a character on stage and be like, ‘oh yeah, that’s me,’ Roberts said. “And … I feel like they’d have a connection with characters on the stage.”

Estes said the production makes for a good family-outing and the audience will enjoy the adventures of James and the assortment of bugs in the giant peach.

Lee Cruse said he was a bad student when he was going through school in Clark County. He’s as surprised... read more