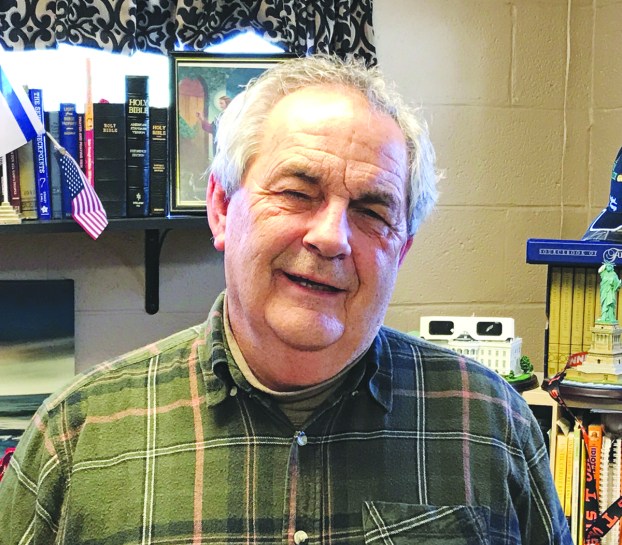 Lee Cruse is the pastor of Grace Bible Church. (Photo by Fred Petke)

Lee Cruse said he was a bad student when he was going through school in Clark County.

He’s as surprised as anyone, including many of his former teachers, that he became a teacher and eventually a principal at Fannie Bush Elementary.

Cruse, a Clark County native, started working at his father’s service stations, before going to mortuary school and working at Scobee Funeral Home.

When he was 19, he said he started feeling the call from God to be a pastor and preacher. College was a much different experience, he said, and led to his parallel career as a pastor at three churches while he worked in the Clark County school system.

After hearing another call to start an independent church, Cruse and his wife started Grace Bible Church in downtown Winchester which now, ironically, owns the former Fannie Bush school building.

Winchester Sun: How long have you lived in Clark County?

Lee Cruse: “I was born here in 1948 in the old, old Clark County Hospital. I even  spent some time as a child, I think, in the Guerrant Clinic.

My dad ran a business here for over 40 years. He ran Cruse’s Service Station. It used to be down on the corner of Lexington Avenue and Maple, where the pawn shop is now. He used to have a service station down here on the corner of Winn Avenue and Main. He had a Standard Oil service station. He had a great business there because it was before Interstate 64 ever came through. Everything came though there whether is was going north, south, west or wherever.”

WS: What schools did you attend?

LC: “I think every school I went to they tore down.
I went to the old Hickman Elementary until the third grade. In the fourth grade, they built a brand new school called Hannah McClure. My principal was Hannah McClure. We went all the way to the eighth grade.

Then I went to Clark County High School, which sits on the property where the phone company is on Lexington Avenue. We had Eunice Haggard as our principal. We were all scared to death of her because behind her desk she had a picture of her holding a double barrel shotgun. The truth of the matter is she was the state skeet shooting champion. When you went in her office, you saw that photo and you knew not to monkey with her.

My sophomore year was the first year of George Rogers Clark (High School) and Letcher Norton was our principal. I graduated from George Rogers in 1966.”

LC: “I was a terrible student, I’ll just say that right now. I was no good. I was lucky to even graduate probably.

In that time while I was trying to figure out what I wanted to do, my part-time job was working at Scobee Funeral Home. That was the day when we were doing about 200 death calls and we were doing over 1,800 ambulance calls, because the city didn’t do ambulances.

When I graduated from high school, Leon Pace who owned Scobee’s at that time, came to me and asked if I would go to mortuary science school. I went and spent a year in Louisville going to school.

When I finished there, I came back and served two years of an apprenticeship. You couldn’t get your license until you were 21.”

WS: When did you first feel the call to be a pastor?

LC: “I came back from there and I was 19 years old. It was in that time I really began to feel in my heart that God began to move in my life and I felt the call to ministry.

I thought I could stay in this business and still preach. The problem was you’re supposed to get off at 5 p.m. Maybe I had something to go do. I started getting opportunities to go speak. Maybe at 4:55 we’d have a wreck or something else would happen and I might not get out of there until 5 in the morning, especially if there were fatalities.

It was a great experience because I got to see life at its worst in a lot of ways. You got to help a lot of people but it was a tough scenario because the number of people we saw, wrecks and gunshot wounds. I don’t think there’s anything I didn’t see, but it gave me an empathy for people.

The Lord would not me loose on this. Finally I had no choice. When I was 21 or 22, I went and told them I had to leave.”

WS: How did you get into education as a career?

LC: “I had to beg to get into Southeast Christian College. I finished my first semester of college and I was called to my first church. I felt as if that was a confirmation from the Lord because I wasn’t getting a lot of encouragement from any place else.

From that, I graduated from there with my associate (degree) and went on to Eastern (Kentucky University) and got my bachelor. … I never thought I would be a teacher. I guarantee some of my teachers rolled over in their graves, especially when I became a principal.”

WS: How does someone who described himself as a bad student go on to be a teacher and principal?

LC: “What I began to figure out during that time was education worked well with ministry.

I was going to have to support my family, and they parallel well. I was off on weekends and if you needed to be off for a funeral, you could do it.

I got hired in 1974 to teach. My first class was special education, seventh grade. I was teaching at Conkwright.

Now, you’re allowed to put five to eight kids in a special education class. Back in those days, if a kid looked at you crossways, the teacher would say you’re special ed. So I had 20 per class.

They weren’t dumb and they weren’t really special ed, they just hated school. … I saw myself in a lot of them.

If someone comes along and really believes in you, man what you can accomplish.

WS: What brought you back to Winchester as a pastor?

LC: “My wife and I were pastoring in Falmouth and Cynthiana. The Lord started laying it on my heart to get a building and start an independent work.

I was the principal (at Fannie Bush). I was principal for 15 years. I thought there was no place like Fannie Bush.

I was driving back and forth to pastor and I felt guilty because I couldn’t give it what I needed to do.

When you start having those kind of ideas in your head, the first thing you think is that’s my ego, that’s not the Lord or that’s the pizza I ate tonight.

If somethings continues to persist and it won’t go away, then you need to look at it and say maybe it is the Lord.”

LC: “We were basically thinking about doing a Bible study, four or five couples. We met in a house one time and had 16 to 18 people (show up).

… What I learned during that time is if the Lord is truly in something, you don’t have to push it up the hill. Everything will fall into place.”

WS: The church rented a couple locations during its early years. How did the church end up with your former school?

LC: “It’s interesting to me how the Lord works. He put me here as the principal.

Once I retired after 15 years, then He gives it back to us. This is a great old building.

It’s such a blessing up here. We average 6,000 people a year up here that we feed. Our clothing ministry… there are people there all the time. Drug and alcohol (support groups) are back there. We’ve probably done that for 12 years. We have a lot of people that are involved in prison ministry, jail ministry.

Right now we are looking for other ministries. We’d love to do one for veterans but we haven’t figured out exactly what we want to do. This building has been a blessing.”

One of Winchester’s firefighters is searching for clues and information about its early history, which reaches back nearly 150 years.... read more