Nailed it or Failed It: Apple spice cake with caramel glaze 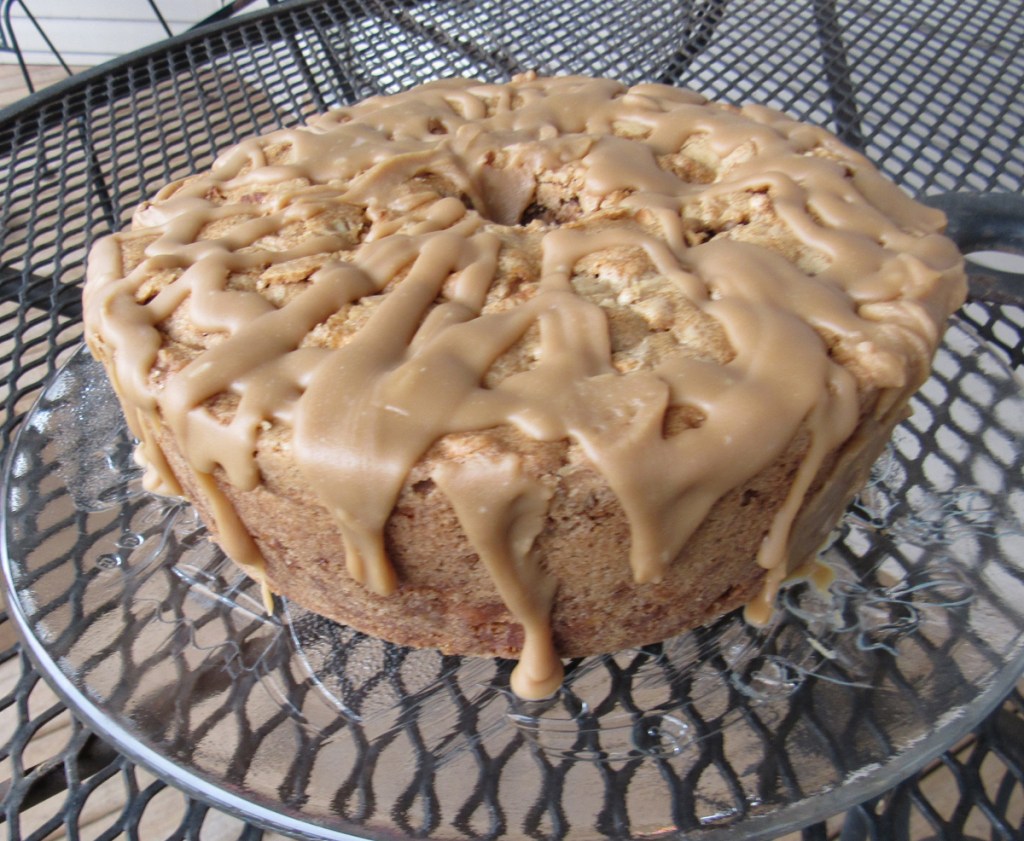 Our son and daughter-in-law, Daniel and Katelyn, were in Florida visiting her parents at Christmas so we decided to have our family Christmas get together late so all our children and grandchildren could celebrate as a family.

For Christmas I have traditionally done a repeat of Thanksgiving dinner, which everyone likes.

I’ve offered to change it up and prepare something different, but the kids say they would like turkey and ham again.

The one thing I do change up is the dessert. I usually make pies for Thanksgiving and something different at Christmas.

While trying to decide what desserts I would make for our family gathering, I started looking through my dessert folder to find something that would require apples.

I had several Granny Smiths in the refrigerator and wanted to use them.

I found today’s recipe, which I’d copied from either a cookbook or some magazine. There was no information with the recipe so I can’t give the proper person or organization credit for this one.

Preheat the oven to 325 degrees.

In a medium bowl, whisk together the flour, baking soda, cinnamon, allspice, nutmeg and salt. Set aside

In a large bowl, preferably the bowl of a standing electric mixer, beat together the granulated and brown sugars and the oil until smooth.

Add the eggs one at a time, beating well after each addition and scraping down the bowl with a rubber spatula.

Beat in the vanilla.

On low speed, add the flour mixture in thirds.

Using a large wooden spoon, stir in the apples and walnuts.

Pour the batter into the prepared pan and smooth the top.

Bake the cake for 65 to 70 minutes, until a cake tester inserted into the center comes out clean.

Let cool for 10 minutes then remove the cake from the pan and let cool completely.

Next, make the caramel glaze.

In a small heavy saucepan, combine the brown sugar, butter, and cream.

Bring to a boil, stirring to dissolve the sugar.

Boil, stirring occasionally for 3 minutes, or until slightly thickened.

Remove from the heat and let cool for 10 minutes or until the glaze thickens slightly but is still able to be poured.

Set the cake, still on the wire rack, on a baking sheet.

Drizzle the glaze slowly over the top, letting some of it run down the side.

Transfer the cake to a serving plate and let the glaze set before serving.

The day before we were going to gather as a family, I was busy getting as much done ahead of time as I could, including making the desserts.

I decided I’d make this cake first and see how things went.

I used my stand mixer and I added the granulated sugar, brown sugar and canola oil (I didn’t have vegetable oil) and I used light brown sugar instead of dark because that’s what I had open.

The brown sugar was a little clumpy and I had a hard time getting it to blend with the granulated sugar and oil.

Finally, when there were just a few tiny clumps of brown sugar in the mixture, I started adding the eggs one at a time.

I scraped the bowl down a couple of times while adding the eggs and then added the vanilla.

I turned the mixer to low and gradually added the flour mixture.

I let the batter sit while I chopped up some walnuts and peeled and sliced three large Granny Smith apples.

I chopped the apples into fairly small pieces, but not so small you wouldn’t bite into them when you ate the cake.

I removed the cake batter from the mixer stand and poured in the walnut pieces and the chopped apples.

The mixture was thick and the ratio of batter to apples and walnuts seemed a bit off balance.

It took some strength to get everything combined. I guess that’s why they tell you to use a wooden spoon, because anything else might bend or break.

My tube pan was already greased and floured (I used a tube pan instead of a bundt pan because it’s easier to grease and flour) so I scooped the batter into the pan and smoothed out the top.

I popped the cake into the oven and set the timer.

The cake took a little longer to bake than the recipe stated, but when it was ready to come out of the oven, it looked pretty good.

I followed the directions and let the cake cool in the pan for 10 minutes, then removed it from the pan and let it cool completely, which meant it sat until the next morning.

First thing the next morning, I mixed up the glaze and let it cool a bit. I drizzled it over the cake and let some of it drip down the side.

I stepped back to get a good look and hoped it tasted as good as it looked.

That evening after we had enjoyed our meal and exchanged gifts, I mentioned dessert. Most were game and dug in.

Our daughter, Sarah, was the first to cut the cake. She was hesitant because she didn’t want to be the one to cut the first piece. I told her to go ahead, that’s what it was for.

Our son, Clay, took a piece and said he thought it was good. He didn’t sound convincing, so I told him I needed his honest opinion. He then said, “Well, it was a little dry, that’s why I added the Reddi Whip.”

I cut myself a piece and thought it didn’t have much flavor. I thought the glaze was the best part.

Brad said he thought it was pretty good.

Sometimes dense cakes taste better after they have set for a couple of days, so I kept a piece for myself and then took a couple of slices, along with plate full of leftovers, to one of our senior neighbors.

After a couple of days I did try the remaining piece of cake to see if it got better with age; but I didn’t think it did.

This recipe definitely got mixed reviews. Half the peopled liked it and half didn’t.

I guess I’ll have to say I nailed the recipe, but I probably won’t make it again — I’d rather have apple pie.

Nailed It or Failed It: Baked barbecue brisket