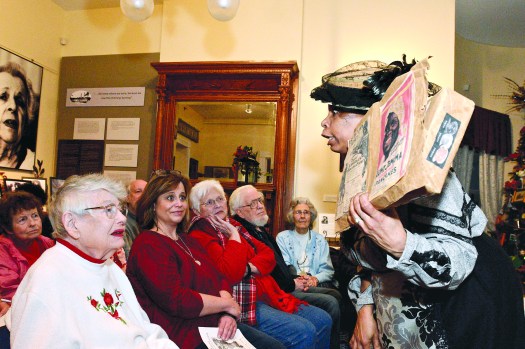 Debra Faulk, as Nancy Green, showed the audience the packaging for Aunt Jemima's pancakes during the second Thursday program, “Being Aunt Jemima, the Pancake Queen," at the Bluegrass Heritage Museum. (Photo by Lashana Harney) 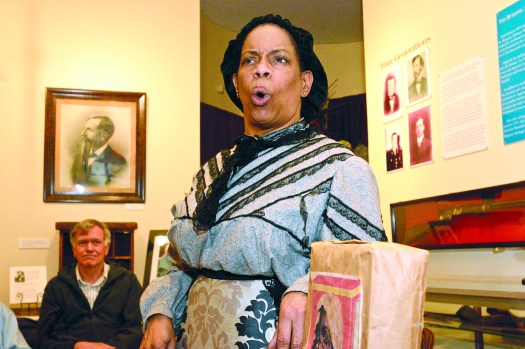 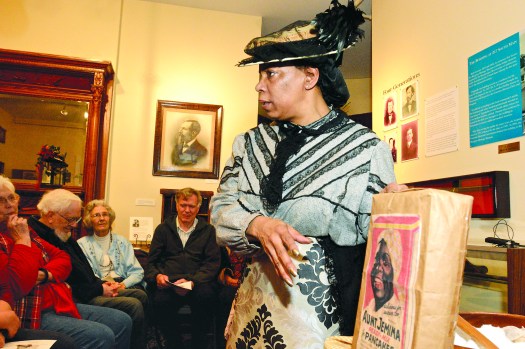 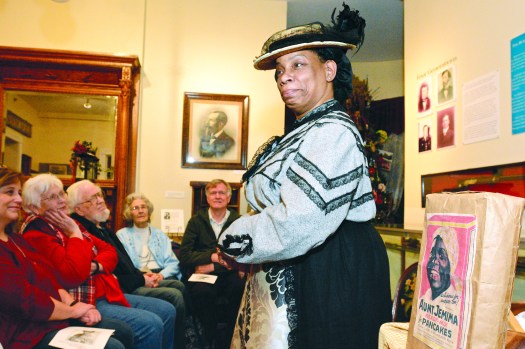 “Paaancaaakees,” Debra Faulk as Nancy Green shouted as she walked into the crowded room of people Thursday at the Bluegrass Heritage Museum.

Faulk’s one-hour performance, “Being Aunt Jemima, the Pancake Queen,” gave the audience a deeper understanding of Green’s roots, where she came from, what she did and how she felt.

Lexington native Bo List authored Faulk’s script, and many of the details on Faulk’s costume were authentic. This is Faulk’s last year of a three-year contract playing “Aunt Jemima.”

Faulk has spent years working in theater serving as a lecturer with the University of Kentucky Theatre and Dance, an artist with the Theatre of Hearts in Los Angeles and a teaching assistant at California State University, Los Angeles.

Faulk has been a part of many area productions including performances with the University of Kentucky Department of Theatre and Dance, the Lyric Theatre and Cultural Arts Center and has entertained at several comedy clubs.

Every chair was full, and others stood or watched it broadcast in a neighboring room while Faulk told Green’s story Thursday, including how Green became one of the first prosperous African American women in the U.S. Green was born in Montgomery County in 1834.

While in Kentucky, Green worked for the Walker family and moved with them to Chicago after “the Great Fire” in 1872. Eight years later, Green became “Aunt Jemima.”

Faulk, as Green, told the audience businessman R.T. Davis had purchased a pre-mixed, self-rising recipe for pancakes in 1890.

“They sold that business to a Mr. R.T. Davis,” Faulk said. “He was a smart businessman. He knew you just can’t throw the name “Aunt Jemima” on a bag of flour and think it’s going to sell itself. He needed an Aunt Jemima out there telling folk just how tasty breakfast could be.”

Davis wanted an “Aunt Jemima,” a “mammy” character from minstrel shows which were popular at the time, to be the face of his pancakes. Green was 56 at the time when she accepted the role.

Faulk said the minstrel shows were foolish as they were known for their depiction of blackface.

“They got his face all blackened up, and big white lips all painted on as if that’s how we all look or something,” Faulk, as Green, said.

“Aunt Jemima” would be a friendly, animated, African American cook who served a wealthy white family.

“He didn’t really hire me, Nancy Green. He hired her,” Faulk, as Green, said pointing to a box plastered with “Aunt Jemima’s” face. “He hired Aunt Jemima. You see Nancy Green, I sort of just disappeared in some ways. When folk come into the store and came in to buy their mix, they came to see her. They don’t come to see me.”

Faulk said they might have painted Aunt Jemima as a “messy minstrel character,” but that doesn’t mean it was all for nothing. Faulk, as Green, said the looks on the children’s faces that came to see her gave her hope.

Despite the hardships of being “Aunt Jemima,” playing the role gave Green financial independence few African Americans and few women experienced at the time.

She used her wealth as a means to empower her community. She was particularly active in her church, leading missionary trips investing in anti-poverty programs for African Americans and advocating for equal rights.

“She was a real Kentucky hero, a community activist, philanthropist and church missionary,” museum director Sandy Stults said during the introduction.

Green’s identity as Aunt Jemima was a secret; the world would not know Green played the Jemima character until after her death in 1923 at the age of 89.

Faulk, as Green, told the crowd to keep believing in their dreams as she did. In reality, that’s what the pancake queen was all about, working to make a difference despite the odds.

After the show, Faulk said she chose to play Green’s character because she, as a black woman, saw herself in the character, and Faulk knew she needed to share Green’s message with the world.