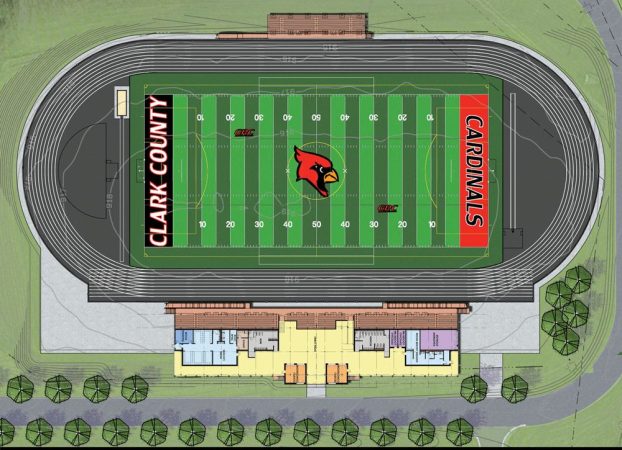 It’s been a long road, but the end is finally in sight for the George Rogers Clark High School gymnasium, field house and athletic fields project.

Codell said original plans called for the construction of the athletic complex at the time of the high school’s construction.

“This was altered for a variety of factors including costs, Department of Education stipulations and other needs of the district at the time,” Codell said.

Since 2014, GRC’s nearly 300 athletes have shared the facilities at what is now Campbell Junior High School, creating issues with scheduling and access. The lack of a competition gymnasium also left the high school without a space large enough for the school body to meet.

“I know the students of GRC will appreciate the completion of this complex,” Codell said. “Playing home games on the high school campus will finally be a reality.”

“The need of these facilities is well known, and all involved are working diligently to continue toward final completion,” Codell said.

“This date will adjust because of working days lost to adverse weather,” Codell said.

“Even with this timeline contractually, we are hoping to complete the football stadium in time for the upcoming regular season, weather permitting,” Codell said. “The gymnasium progress, however, has been severely slowed because of the rain and cold temperatures. “

In January, Codell told the board crews had completed the roof decking for the gym.

The mechanical, electrical and plumbing work is continuing as scheduled in the gymnasium as well. The front radius foundations and stem wall are also nearly complete.

Spray foam insulation is underway on days the temperatures allow for proper adhesion. Following the membrane roof installation, the stone will begin going on the exterior following final inspection of the foam insulation.

“The membrane roofing system that is to be installed can only take place when temperatures are 40 degrees and rising for 24 hours before and after installation,” Codell said. “This is the stage we are in currently.”

Interior MEP rough is 75 percent complete inside the buildings. Construction crews placed the interior radius curb of the track and stone is now down on the field.

Crews also poured concrete walks at both the home and visitors grandstand areas. Bleachers are substantially complete, and crews installed the press box. Drying in the stadium buildings will allow interior finish work to begin while the gymnasium work continues toward enclosure of the structure.

“Work is proceeding inside the gym where available but until the roof is dried in, no fireproofing of the structure can take place,” Codell said. “Everything hinges on the weather at this point.”

Phase three is the construction of the field house, baseball and softball fields, and is set to begin soon. Codell said phase three would take about 14 months, which puts projected completion in summer 2020.

The board first approved the athletic complex design schematics from RossTarrant Architects and Codell Construction in March 2017. However, over the past two years, the board has voted on some design changes and have looked at the project in more detail.

“Once the green light was given to move forward, the design team and Codell have moved as quickly as possible to start construction to complete the complex,” Codell said.

The plans include a 60,000-square-foot facility to house a gymnasium, complete with exposed 140-feet-long roof trusses, that will seat about 4,300 people.

The competition gym at the high school — which has an auxiliary gymnasium for practices — will also have weight rooms and meeting rooms, as well as a trophy showcase and a lobby. It will also be large enough to host graduation ceremonies and regional tournaments.

The home seating for the football stadium is 3,500 seats and visitor seating is 1,000. The football field is a turf system with a safety shock-absorbing system below the surface, and the field is of a size to accommodate soccer.

The facilities also include an eight-lane track and new athletic equipment for all track and field events. There are locker rooms, office and storage space and concession areas beneath the home grandstand.

“All of the new buildings encompass the same building materials as the high school including the matching stone and metal wall panels,” Codell said.

The 18,500-square-feet field house also includes a weight room, batting cages and interior turf multipurpose space for drills and more. Both baseball and softball have an individual press box, lighting and sound systems.

The tennis courts will be one of the last parts constructed. Currently, crews are storing the soil and other materials in the spot where the courts will be.

Plans also include a multipurpose room that will be used by the school’s JROTC program.

Codell said the new athletic facilities, once completed, will allow Clark County to host regional tournaments for all sports, something they have not been able to do in the past.

“Home track meets will be a reality, which is something that wasn’t even possible when I was in high school at GRC,” Codell said.

For a long time, the school administration has worked hard to bring the project together, Codell said, and it’s exciting to see the finishing line in sight.

“It’s something the community has been interested in and involved in from the very beginning and something residents of Winchester can be proud of,” Codell said. §

Three decades ago, James and Audra Young were looking for an opportunity. Their son was getting ready to attend Eastern... read more