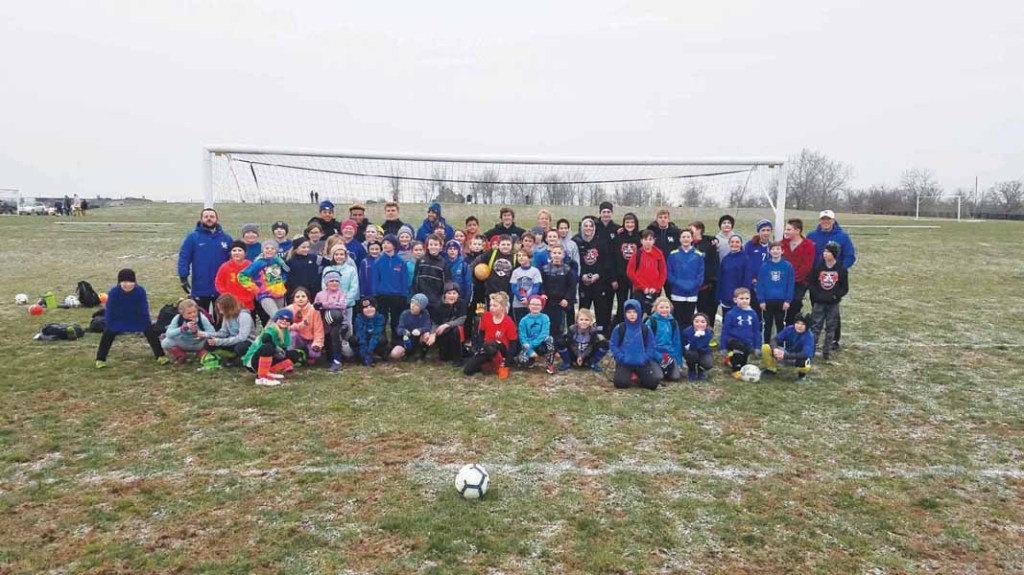 FC Kentucky Director of Coaching Bernie Stevens hosted a UK soccer clinic and the coaching staff and players from UK came to Winchester Thursday and spent time with the soccer club. (Photo submitted)

Bernie Stevens, the Director of Coaching, has been in contact with the UK soccer coaching staff since early winter and was able to pull some strings to get the UK players and some of the staff to come out to Winchester to spend time with the community.

Stevens said the event was a huge success.

“Weather aside ,the clinic went great,” he said. “We had more than 60 kids show up for it and that’s more than half of our club. The UK guys were great and made the kids feel like they were worth a million bucks. It was one of those days where it was an all-around joyous experience. The kids were snickering, giggling and having a blast all over the complex last night.”

Stevens said the clinic was made possible because of flexible the UK coaching staff was and they were willing to help.

“We were putting on a winter clinic during Christmas break for our club and I contacted coach Cedergren about coming over and talking to the guys and girls just to give a speech,” he said. “He couldn’t make it but said let’s try to get together in the spring and I can send some coaches and players over for a clinic. We have been working on it trying to make it happen since the middle of January.”

Stevens said he wanted to host the clinic to put it into better perspective for the kids that they can achieve greatness if they stay humble and are willing to put in the work.

“They enjoyed it because growing up in Kentucky, at least when I was young and it’s still a lot like that, kids want to grow up playing basketball or football at UK. This is our home state’s soccer team. They had a good year last year and made it to the Elite 8, but the kids come out and see these guys as heroes. All the kids were in awe with all the players that came. There was a lot of snow on the ground which made them happy, too. I wanted the UK players to share their success stories to show the kids it could be them if they put in the work, time and effort. I told them ‘This could be you, you could be playing at this level.’”

Stevens has been the DOC of FC Kentucky since last August and this has been the first event where outside people came and interacted with the kids and is hopeful to host more clinics like this in the future.

Stevens said he is beyond grateful for the players and coaching staff for coming to Winchester and giving the players hope.

“I can’t thank the UK staff and players enough for coming over and doing this. It meant a lot to me, the community and those kids.”