GRC anxious to head to Rupp for Sweet 16 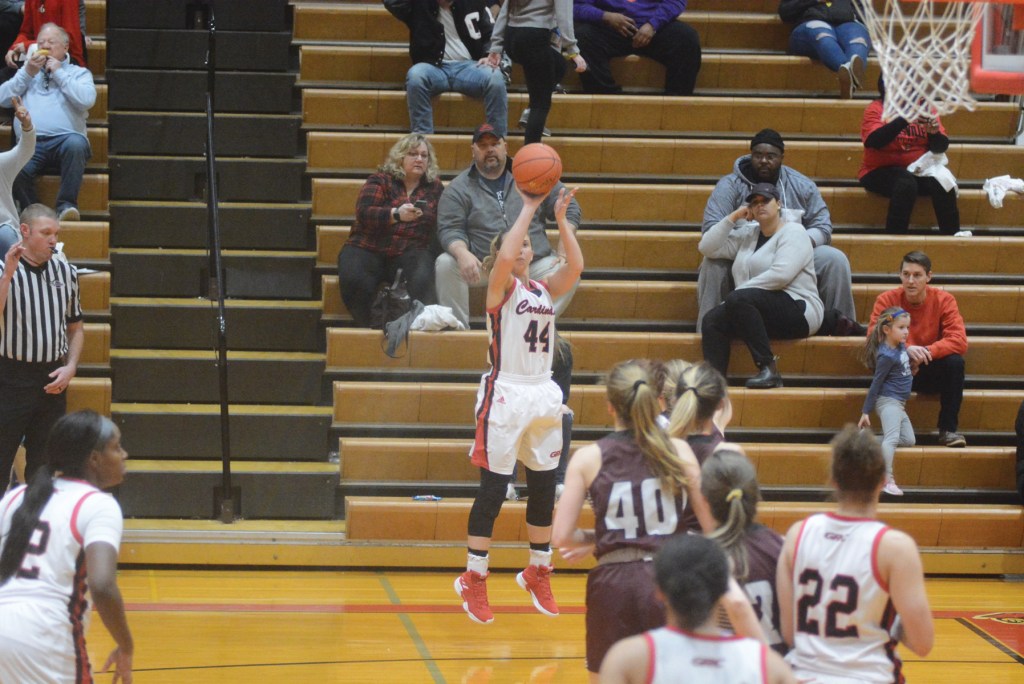 Hayley Harrison drains a three in a Jan. 29 matchup against Bourbon County. (Photo by Micah Satterly)

The George Rogers Clark Lady Cards are set to face the 6th Region champions in the Mercy Jaguars for the first round of the Sweet 16 at Rupp Arena Wednesday.

Much like GRC, the 16-14 Jaguars are no strangers to the state tournament and are making its second straight appearance to the tournament.

The Jags finished as the state runner-ups in 2018 after falling to Mercer County.

After finishing in the Final Four last season, the Lady Cards are determined to take it to the next level this year.

Head coach Robbie Graham said his team’s hard work has paid off, but they are not finished yet.

“We’re excited to play in the Sweet 16,” he said. “It’s always one of our goals at the beginning of the year. We’ve worked hard to get here and it hasn’t been easy. We’ve played a tough schedule and just finished a tough a regional semifinal. We came out in the region finals really sharp and really focused and had a good start. Hopefully we can keep the momentum.”

Graham is aware of the challenge the Lady Cards are in for and said Mercy is a better team than what its record reflects.

“Mercy is really talented,” he said. “They’ve brought a bunch of talent back this year. They were preseason ranked first and we were second. It’s ironic we’re playing each other. It will be a tough task and they are well-coached. They’re able to play multiple defenses and it will be a tough matchup. Their record has no indication of what kind of team they are. We know they’re a good team and have we’ve watched a lot of film and preparing for them as best as we can. It’ll be an all out war. Execution on offense and defense will be important for us and for them. Rebounding will a huge key for us.”

Graham said Mercy has controlled the tempo in a majority of its games this year and Graham said his team will need to be prepared for whatever the Jags throw at them.

“We’ve got to handle the ball and look to score under pressure,” he said. “We’ve got to be aggressive and attack the basket. We’ve got to hit the offensive glass on their zones to put some heat on them.”

Despite the preparation, Graham said he is anxious to head on the road for Lexington.

It’s a game we’re looking forward to playing,” he said. “I’ve had some great conversations the last couple years with coach Keith Baisch and have a ton of respect for him and what he’s done. We have a really tough first round and we’ll see what happens.”

Graham said his team has had great practice sessions over the weekend.

“We’ve been sharp in practice,” he said. “We took a day off completely to catch our breath and reflect on winning region. We got back in the gym the day after. We’ve been going at it pretty good. We’ll get  some shots up Tuesday and try to save our legs. We’re definitely focused and ready to get going. We’ve been getting after it. We’re really excited to tipoff the Sweet 16.”

Tipoff against Mercy will be 6:30 p.m. Wednesday at Rupp Arena.